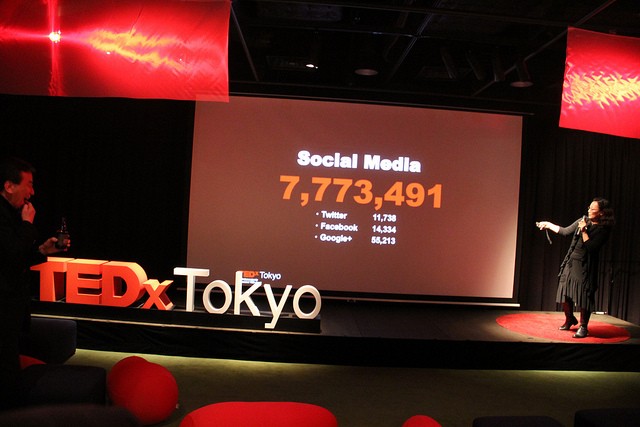 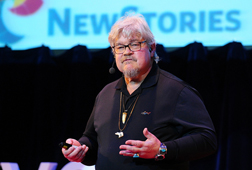 I had very interesting night on March 7th!

I was asked to speak at TEDxTokyo Teachers on Learning Resilience.  The presentation, itself, was a practice of resilience.  I was going to share when I spoke anyway (and the video later), but decided to share the whole episode.

An evening of resilience…

There were about 400 people at the Tokyo International School and perhaps 10,000 or so watching on the live stream video on the Internet.  Patrick, the co-founder of TEDxTokyo claimed millions, but I suggested he exaggerated!

I want to share more or less what I said that evening and what happened along the way.

Patrick asked me to talk about resilience tonight.  I asked him why.  He said “well, you’ve been blogging about Resilient Japan for almost three years now – what the hell are you really talking about?”

Hate it when I get busted like that!  Here I am, almost finished with a book for Eiji Press to be released this fall – CALLING COMMUNITES BACK TO LIFE – and I didn’t have an easy answer to Patrick’s question.

So, let me back up and say a little bit about me.  I first came to Japan as a student at Waseda University in 1970 and began a close, personal relationship with Japan. When I wasn’t in Japan I was doing grassroots community development work.  First as a practitioner in the US and then as a learner with people in other parts of the word – primarily the global south.

In 2010 I helped to introduce the Art of Hosting Dialog and Future Centers in Japan and spoke as part of a father-daughter duo at TEDxTokyo. That was pretty cool. For the last three years I’ve spent about five months each year supporting people in Tohoku build the future they want.  It’s been an amazing time.

Back to Patrick’s question:  what the hell am I talking about?  R E S I L E N C E.  What does it really mean?

What’s required for us to be resilient?   It’s really some pretty basic stuff:

I click on the first slide and the first two points… 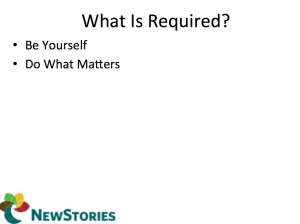 And the screen goes black behind me.  I notice, make some comment to the audience, play with the clicker a little bit and decide to just keep going:

Guess what – we don’t teach ANY of this in schools.  Instead we stuff people full of information – most of which they can get on the internet when then actually need it.  But we don’t help people learn anything about being resilient.

Why is this important, now?  Why is it especially important now?

There’s a normal curve that life follows.  Things get better and better, there are some bumps along the way, they peak, they fall apart.  Sometimes it’s a long curve, sometimes a short one.  Nothing lasts forever.  Conditions change.

Now if the screen was working you’d be about to see one of my carefully and artistically designed slides.  Now, you’ll just have to imagine…

Then Patrick comes on the stage to “help.”  I greet him, we banter a bit. The audience laughs.  He plays with the clicker and gets the same result I did.  I’m thinking, well, okay, no big deal, I’ll just keep describing this.  After a while, I say goodbye to Patrick and he leaves…

Back in 1995, when the Great Hanshin earthquake happened, most people thought Japan was going in the right direction.  Being a super economic power is pretty cool.  Sure, the bubble had burst several years before, but most people still believed that we could produce and consume our way to have a good quality of life.

By the 2010s, more and more people had the experience that things weren’t so good and they weren’t getting better anytime soon.  Stress is high, happiness is low, satisfaction is scarce.  3.11 had a huge energetic impact across all of Japan.  At the level of collective consciousness there was a sense of we have been released from a future we did not want.

Right now many of us see a cascading series of climate disasters, fractured economic structures and decaying systems in health, education, governance and elsewhere.  Things are falling apart.

So what happens?   People start jumping off the old curve and work to create a new one  Some stay and do the work to keep existing systems from collapsing completely.  Others, when they see promising new potentials , build a bridge across.

People need to be resilient to work in these three essential areas. And each each essential now.

Patrick returns.  I get a little annoyed, I mean things are working fine and these interruptions are eating into my allocated time.  But he’s trying to be helpful.  So I welcome him.  We chat.  The audience laughs a bit.  He messes with the clicker again and gets the same results.  I continue…

After 3.11, many things were cracked wide open. When this happens there is immediate pressure to get back to the old normal, to close the cracks.  We’re so much more comfortable with false certainties than true uncertainty.  In Tokyo and other parts of Japan many people are lured by the siren song of Abe-nomics – we will be great again. “Japan is Back.” But scratch that surface and many are eager for change.

In the coastal towns and in Fukushima there’s no old normal to go back to.  They have to go ahead.  They know that means being resilient.

Last weekend I was in a small gathering of activists in Fukushima.  They know they have to build new resilient community.  The past three years have given them confidence they can do so.  They will keep their happiness at the center of the world they are building.  They will build strong local-nomics.  They have let go of the old – even 3.11.  They have each other and they will make a new future.

So, back to learning resilience.  What’s required here?  How do we bring the teaching of resilience into the center of our learning systems.  Those of us who care about this have some work to do.

Patrick comes back for a third time.  These interruptions are getting a bit annoying, but what the heck.  We banter, he reaches for the clicker again.  I give it to him with some exaggerated annoyance.  And he gets the projector working.  There was a small little button that turned the screen off.  Not the power button for the clicker itself.  New clicker; no one knew. Patrick smiles, walks away.  I thank him and continue something like this:

No surprise here.  It is the same stuff.  We have to be resilient.  We have to do it ourselves to create the learning systems we want.

We need to start now, there’s no reason to wait.

It is a pleasure to be with you this evening.

Now I said “something like this,” because I’m not sure exactly what I said.  WHAT A LEARNING!  I had enough resilience to deal with losing the screen and enough resilience to play with Patrick’s interruptions, but it was having the damn PowerPoint back that knocked me off my stride.  My slides were back, I started clicking through them and they took my attention away from the audience!  I got distracted.  I lost it.

People were really following what I was saying and were aware of how it was being reinforced by what was going on on the stage!  Had I simply paused, breathed, and settled, I could, I think have brought some key points home.  As it was, I ended weakly.  All learning!  I found out later that some in the audience were annoyed because they thought Patrick and I staged it all.  Oh well..

Here’s a link to a WORD file that combines my remarks and my “high quality” graphics.  I don’t usually write things out — but with 8 or so minutes, it’s helpful.  I said something like what was written — but even earlier, without the Powerpoint to distract me, I went deeper in some areas, following the responses and energy from those in the room.  When they do the edited video of my presentation, I’ve asked my TEDxTokyo friends to keep all the interactions with Patrick.  Just a demonstration of resilience.