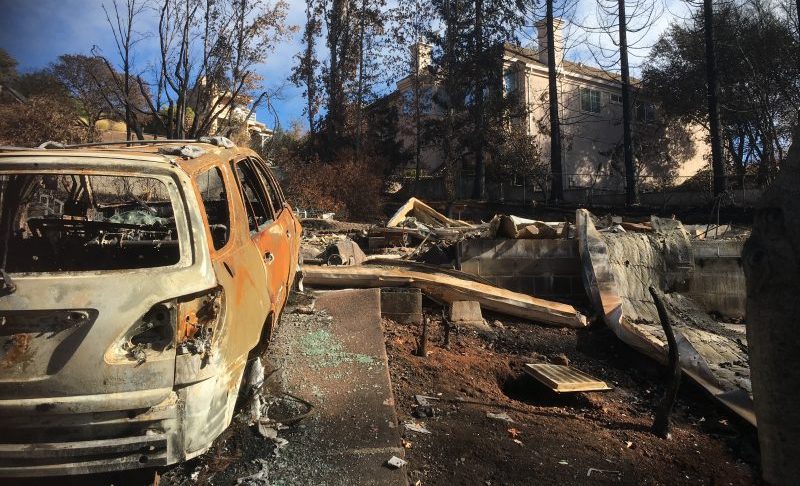 After the Fires in Northern California

I was in Sonoma and Napa Counties earlier this month. Listening, asking, feeling, listening some more. I’ll share reliable statistics when I find them. Hundreds of thousands of acres are burned. Somewhere in the neighborhood of 8000 homes and buildings destroyed. As many as 100,000 people displaced from their homes, with some slowly returning. The most comprehensive article I have found so far is from the LA Times a couple of weeks ago: http://bit.ly/burnedca

I was on a mini-listening tour with Simone Poutnik, our new Executive Director at NewStories, to get a feel for what has happened and to begin to explore questions of what else is possible now?

What’s easiest — and quickest — to do is rebuild the past. A minor tweak here or there, but let’s get back to the old normal where we knew exactly what to complain about. It takes more time to reimagine, to dream, to create new stories and new horizons and pathways.

The fires illuminate what’s already here — the beauty and the boils. Where the fabric of life is worn, it tears it. One way I experienced this in Japan was that the cracks in our perceived reality were opened wider. Of course, there is enormous social pressure to close the cracks, patch over the tears, lance the boils. But what if we developed the patience to stay in the discomfort and uncertainty?

Already I’ve heard about some of the cracks — immigration, homelessness, gaps between the rich and the poor. And, of course, the questions about human habitation on this land — structures, electricity, water, overuse. They were all here before. Any number of times I have heard people say “why do we care more about the people who were homeless on October 9th than those homeless the day before the fires?”

In a community conversation, Thursday night at the HUB at Sonoma State University, Simone and I worked with Mark Fabionar, Jeff Aitken and Kate Seely to organize and host a gentle inquiry to begin imagining what else is possible. About 30 people came. We spent three hours together.

One of the things which immediately struck me was how many people were there because they wanted to do something, NOW. As we were driving south after the gathering, I was hit by the fact that in Japan’s disaster area in 2011, there were very few nonprofit organizations. The region was populated by rural folk who were mostly known for doing what government said. In the month and years after the disasters, many new organizations were created as well as ones from other parts of Japan opening operations. But here’s the rub, one of the real obstacles for real progress was that many of these organizations were more beholden to their funding sources than to the communities they were working in, and collaboration was threatened by competition for funds. How is that avoided here?

I’m learning how the lessons shared in AfterNow may apply. After the cascades of disaster in these last several months, NewStories has decided to make eBooks available for free to disaster survivors — just go to http://afternow.today/purchase/, select an eBook and use discount code SURVIVOR at checkout. For others who have not been rocked by disaster, we’d appreciate it if you purchased the book without this code. But we want to spread the word.

Today I drove and walked in the devastation of the Atlas Peak fires. The smell of burnt wood thick in the air. Homes utterly destroyed alongside ones seemingly intact — right next door. I found a place where I could walk on the land and offer prayer. The words that I formed were about the land being “whole and broken.” The old voice of the land corrected me: “whole and wounded.” Life endures.

I’m thinking about what might happen here and how. One thing that keeps coming up for me is Transformative Scenario Planning — which is a fancy way of talking about coming together and creating alternative new stories about what the future might be, should we choose to make it so.

It’s time for listening and listening some more. Time to grieve and time to get back to a semblance of stability. The wake of this and any disaster is long. Everything is changed and nothing is changed. And in the aftermath of the destruction, new possibilities arise.