I’ve spent the last few days in Iwate Province, the most rural and most northern of the three provinces devastated last year on March 11th.  I’ve been in to coastal communities — Yamada Town and Otsuchi.  Each had a population of around 20,000 before 3.11.  Both were partially destroyed — fishing industry, agriculture, commerce and housing.  In each two around 2,000 people are living in temporary housing with no permanent housing expected until sometime in early 2014.  Temporary housing, while better than the emergency shelters, is small, cramped, and cold.  Most neighbors are strangers.  Most people don’t want to make community there because they don’t want to be there.  It is not home.

I’ve been in a small dialog in Yamada Town and in a Future Session in Otsuchi.   In Yamada, an energetic entrepreneur in his fifties called together some of his friends for a dialog.  In Otsuchi, an NPO charged with community development work invited people to a Future Session.  The two sessions were very different, and very much the same.  My primary role in both cases was mostly to listen.

For the most part, people don’t want to go back to the past.  It wasn’t working out so well.  Shrinking and aging population, listless economies, diminished collective will:  living a slow decline.  But the way forward is still invisible.  Until now, people haven’t even had breath to talk about the future.  There have been too many pressing things to attend to — at least getting everyone in temporary housing, getting roads repaired and public transit running again, having at least a few stores and shops and restaurants open again.  That’s done.  People have survived.  But what’s next?  Where do they go.

Coming together, they notice the little and important things — buses still stop at the bus stop outside the destroyed hospital, but they don’t stop at convenience stores where people could wait and be warm; there’s still few safe spaces for children to play; the second floor of a partially destroyed building is where volunteers gather — and the city is talking about tearing it down.  What’s clear, as I listen, is that they need a place where it is possible to have these conversations regularly — a place where they will connect with each other.

There’s a sense of urgency to get something done.  But, they don’t just want to talk.  They want to make things better.  However, as one small group described, the level of consciousness is still low.  Said another way, people are unable to see very much or very far.

The dilemma is that community improvement work that comes out of conversations like these is often anemic.  It lacks power.  Either nothing seems to happen, or what seems to happen isn’t all that impressive.  People get discouraged and move back into isolation.  There’s not much of an understanding that when one works with new people to try new things, at first the results are unimpressive.  People don’t know this is normal.  They’ve never heard the word “prototype.”  They ask, at least to themselves, what the hell do you mean “action-learning?”  They get tired and discouraged.

Part of the problem is that there is no commonly held story for the future.  There aren’t even explicit alternative stories for the future.  Use the word “vision” if you like.  Or use the word “scenario.”  Whatever the word, there is nothing around which possibilities can cohere.  Even when there is clarity of purpose (like do things which will encourage younger people to stay in our rural community), it’s hard to find traction because there is little common clarity about which direction is forward.

So it seems, often, that we need many things, at once.  We need places where people can have meaningful dialog that does lead to effective collaborative action.  We need to work in ways which invite people to see more of the whole system.  We need design thinking.  We need scenario planning.  We need to learn how to use knowledge from the outside.  We need insight and inspiration from the inside.

One of the conversations we’ve been having in Japan is about a role we’re calling “Innovation Facilitator.”  It comes out of this diagram: 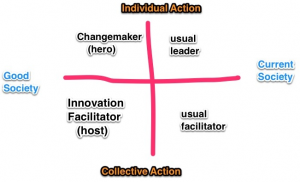 An Innovation Facilitator develops a broader view of the whole system.  S/he has a number of tools which help others see further — scenario planning, design thinking, reflection/action processes like Theory “U.” The Innovation Facilitator is able to design and host gracious space where people create both relationship and action.

We’re working to develop a learning program for Innovation Facilitators.  One that would happen with separate but connected cohorts in Tohoku, the Kanto area around Tokyo, and the Kansai area around Kyoto.  These last couple of days I’ve been thinking about how important some version of scenario planning is in this learning.

As always, good to be here.  I missed my family on Thanksgiving — my daughter came home from NY and she and my spouse followed an annual tradition of joining good friends for Thanksgiving.  I sat in a small restaurant/bar having a bowl of curried tofu and rice, responding to the questions of a curious banker in Yamada.  I feel like I am where I am supposed to be, staying present and curious to what wants to be born here.