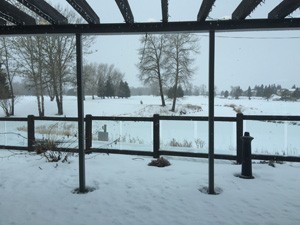 Small communities can be amazing and High River, Alberta, Canada is at the top of my list right now. I’ve been with people in community there for three days. About 90 folks who care came out for one of more of four sessions of the Our High River Summit. That’s out of 13,000 people.

In the summer of 2013 torrential rains came and the river that runs through town peaked in a devastating flood. But the summit wasn’t looking back at the flood – it was looking towards new horizons. What’s the community we want?  How do we build it together?

The Mayor walked in towards the end of our first evening together. We were talking about how communities change. He arrived just as I was saying local government don’t make change. Where did we ever get that idea?  They keep the streets plowed and the garbage picked up and the water running, but usually when they try to change anything people just get pissed off. People – people like all of you in this room – are the one’s who make change. A different Mayor might have taken exception to that comment. I’m told he was breaking into a big grin as he stood outside our circle, looking in. Later he said to me do you know how amazing this room is?  Can you feel the energy?  I know the people in this room; I grew up with a lot of them. They are the ones who can lead our community.

I shared stories that night from my work around the world. Start anywhere, follow the energy everywhere. Greet each other with curiosity, respect and generosity. Listen to each other as if you future depends on it – because it does. See your differences as strengths for the community. For the most part, I was just giving people some words for what they already knew.

Through the three days we used practices from Art of Hosting Conversations and FutureCenter work. We 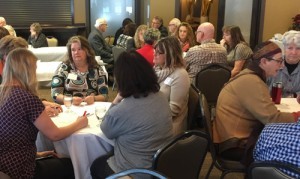 were in circle and in pairs and trios and world cafes and in silence. I’ll share the designs we started with later in this blog. I’m not going to try to summarize the meeting. If you want a glimpse, check the twitter feed:  #OHR2016Summit, or in a few weeks checkout http://www.ourhighriver.com. But I do want to share a few things that that stood out for me.

One of the things we did on the second night was bring people into storytelling trios to share the story of a time they had stepped forward to offer their leadership. Afterwards, in our harvest circle, Shelly – one of the organizers – had this look of joy on her face. Her statement was simple:  this is amazing. I knew, but I didn’t really know. This community is filled with people with know how to step forward when the time is right. 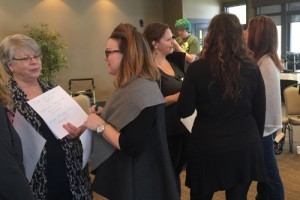 It’s a connected community. Earlier on the second day, Scott, a long time teacher in community, was saying to me so many here were my students. Jodi and Fawna were in my classroom. I had a sense of who they might become – and they have. It was said with absolute pride. The next day I was listening in on a conversation when Bob said to another fellow, I remember back when, you were a pretty good hockey player. Throughout our time when was asking people to form groups with those they didn’t know well, I’d hear some people commenting about how they knew almost everyone in the room. But it didn’t stop there because there were also many who were “new” to High River. They were welcomed with open arms. Some places that are community almost erect a barrier and subtly tell newcomers that they’re going to have to take several years to prove themselves before they’re really welcome. High River welcomes now. Maybe more so since the flood, but I am pretty sure this welcoming spirit has been around for a long time.

On the second day we did a world café around the question of what’s possible now in High River. They after a break, I asked people to be in new trios and said how much of this is just blue sky crap?  What do you really care about?  Where do you want to place your attention and your work and your energy?  What would you get behind? We did a “sticky” harvest with post-it notes, asking people to write as many as they wanted – but with only one idea per sticky. And then we asked for a few volunteers to step forward over lunch to find the patterns in the notes. They found six:

I loved the way they were thinking about their community. They didn’t create a list of projects; what they were really calling out were the characteristics of High River as a vibrant, thriving community. I was especially appreciative of how they talked about economic development – it was clearly and explicitly not an end in itself, it was a critical part of community vitality. Again and again I heard people affirming that they did not want to become a big box store town like Okotoks, a little to the north, and they certainly did not want to become a bedroom community for Calgary. They were determined to keep being a vibrant, healthy community.

Sure, there were projects in the room as well. There was Bob’s quiet and clear invitation that High River needs an attractive identity and he shared all of his brainstorming around bicycles to pedal that identity. Or Ted who lights up when he talks about even more possibilities with Christmas. Or Paula and Leslie who see what can and should be done to increase food sovereignty.

As we drew towards the end of our time on our third afternoon, I invited people into a NOW CAST, a new approach I created a couple of months ago in Japan. Looking back, I wish I had first inviting people into an Open Space, springing forward from the patterns in our sticky harvest.  This delving into specific projects and work will happen next through Our High River.

This is not complicated work.  It is powerful work:

That is the work of Our High River. It, itself, is a growing self-organizing system.  During the summit OHR 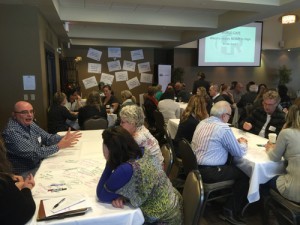 put out a call for “coaches” to support people in taking their ideas to action.  Several stepped forward and said that’s my work. OHR put out the invitation for some to step forward to make meaning and make sense out of all the notes from these three days.  People with that skill are stepping up.  Meetings for next steps are already called by some people who are ready to go.

Is High River unique?  Not so much.  Is it special?  Absolutely.  Every community where people reach out across their differences and say we will do this together is special.  And there is something that inspires me.  It’s the older woman who proudly announced on our third morning that she’s made her first Tweet (and the guy who said, he’d at least downloaded it to his phone.) It’s the moment of silence someone called in the circle for Dwight, a High River father of two, who had just taken his own life.  It’s the man who said that he may not be alive much longer, and that he wanted to make at least one more difference.

This is a continuing story and it is the story of communities everywhere where people remember that anything is possible when they step out of isolation, let go of fears and judgments, greet each other with curiosity, respect and generosity, and roll up their sleeves to do what’s possible now.

For many years one of the principles I’ve worked with is whatever the problem, community is the answer.  That shifted for me in High River:  Whatever the opportunity, community is the answer.  We’re living in an unusual time.  Much is changing and the future is becoming more and more invisible.  We just can’t see very far ahead anymore.  When that happens, we have to bring our attention to NOW.  To the people around us, to the resources we have at hand, and to the next steps we can take when we stand up and stand together.

For those interested in design:  PDF of basic designs and flows we started with and which, of course,  changed along the way