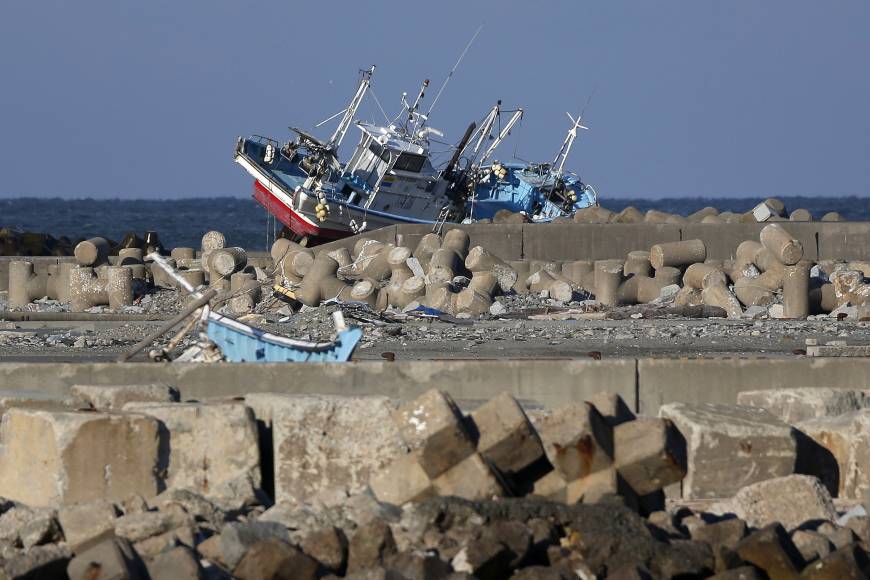 This afternoon I stood on the seawall five miles north of the Fukushima Nuclear Power Plants.  A lovely fall day.  I began a loving kindness meditation:  may I be filled with loving-kindness; may I be well; may I be peaceful and at ease; may I be happy. The words came easily to heartmind, but my body was filled with sadness and grief, some anger, restless uncertainty. I would need to pray for many days to come to the release that comes immediately when I begin this meditation.

The seawall was along the coast of Namie, a town of 20,000 evacuated after the triple disasters of March 11, 2011. Like it’s neighbor, Itatemura, over the mountain ridge, it is now a ghost town.  The towns are very different.  This blog is a bit of their story as well at a glimpse of nuclear radiation clean-up on the ground in Fukushima.  Pictures in Facebook tell the story more vividly than my words.  Please be sure to have a look – click on pictures to see annotations and scroll through.

Namie is the closest town to the reactors.  People there didn’t really know much about radiation.  Most of us don’t.  Far from the epicenter of the quake, Namie counted itself lucky when there was modest damage from the quake and the smaller tsunami than in areas further to the north.  It was awful, but it seemed manageable.

On March 12th, the first reactor explosion occurred.  No one knew what it meant.  It wasn’t good – but everything looked the same.

Because of its proximity to the reactors, a total evacuation was called.  All 20,000 people in Namie were told to leave.  Most hoped they would be back in a day or two. There was total confusion.  Because of the wind patterns, extensive radiation was dumped on the mountain tops bordering Namie.  In the small city itself, the actual level of radiation varied from very little to moderate amounts – often no higher than that detected in Fukushima City, about 60 miles inland. The town was shutdown.  But no one, anywhere, really knew what to do.  No one really understood what the radioactivity levels really meant.  People were ordered out  of their homes and either made their way to the emergency shelters or to the homes of friends or family.

Over the ridge, Itatemura, a small rural village developing a reputation in Japan for its clean air, delicious water and fertile soil, was further away.  But the wind patterns in March of 2011 saw fit to dump extensive radiation on Itatemura.  Confusion raged, but soon all 6000 people were forced to evacuate.

Itatemura was had more radiation damage than any single other place in Japan.  It’s become a bit of an experimentation place where Tokyo is learning how to decontaminate.  I say Tokyo purposefully because everything being done is being controlled and directed from Tokyo.  The local people are ignored.  You’ll see in the FaceBook Album the top layers of soil are being removed from rice paddies and vegetable fields, hoping to capture and take away the radiation.  The result is now barren fields with all their top soil removed and multiple mounds of plastic bags of radioactive soil, headed for a yet undecided storage location.  In the mountain forests, trees are being cleaned by hand – one by one.  Scraped, washed and scraped again.  Clean-up is happening, but what it means is unclear.  There’s no timetable for anyone to return home to Itatemura.

Cheap nuclear power is a complete lie.  It is cheap only when calculations are based on the costs of construction and cost of operation of nuclear power plants.  A full cost analysis would add in the damage to people and the environment involved in the extraction of uranium.  It would add in the completely unknown cost of storing the nuclear waste of spent fuel rods (like those at Daiichi Four).  It would add in the horrific cost of unanticipated nuclear disaster.  We don’t calculate these last three costs because we can’t.  And they are each and all overwhelming!

Visiting Namie was like stepping back in time to April, 2011.  Before the radiation dropped from the sky, Namie already had earthquake and tsunami damage.  But before anything could be done to start cleanup, things got complicated.  All the debris is radioactive.  So no clean-up has been done.  There’s been some careful piling of debris in order to look for bodies – two and a half years later, 30 people are still missing and people are still looking for their bodies – but everything else is as it was when people were forced to evacuate – but not quite.  Doors and windows were opened after being closed for a year in different apartments and houses – mold had taken over everything.  House, shops and businesses neglected for two and a half years are in a state of decay.  Hard on my heart, just like my first visit to Ishinomaki in April, after the disasters.

Earlier this year, residents of Namie were allowed to return during the day – they have to leave by 4pm, but they can come home and begin to discover what to do next.  No water – their pure water is radiated, no sewage treatment, limited electricity. But they can at least go home during the day.

People all over Fukushima are learning how to decontaminate.  They’re also learning what radiation is actually all about.

Yesterday I wrote in my blog that the world, when it has time to pay attention to Fukushima, focuses on the dire conditions at Daiichi Four or on the tons of radiated water being dumped into the ocean.  The world’s attention rarely goes beyond the boundary of the nuclear power complex.  There’s another story as well.

It’s the story of people who are figuring out what radiation means.  Mostly, we don’t really know.  Common agreement that it is bad for us – but what does that really mean.  Thankfully, there have been few opportunities to study it.  Important questions like: when you eat food that’s had exposure to radiation, how much of the radiation actually stays in your body or is it different if you are young, or old, or have a weak immune system?  There are also broader questions like how do we compare the impact of radiation from living in a low dose area to the radiation from plane travel or even the radiation from airport X-ray machines?

These are among the questions Japan is exploring for all of us.  This will not be the world’s last nuclear disaster.  The Japanese know that they are doing this work for themselves and for the next place as well.  Everyone is doing the best they can.  Emotions are often heated.  There’s probably no one anywhere in Japan who gets up in the morning hoping to make things worse.  But some do make things worse.  The half-truths told to protect people end up hurting them.  There’s no master plan that will fix all of this.

I get pissed off from time to time when I see or hear news, usually from the US, that takes a smug and superior tone.  The voices almost say don’t they know this stuff is dangerous?  Believe me – they know. And they know they need to know more.

People in Fukushima have a fierce commitment to this beautiful and ravaged land.  Some will leave when they can.  But for others, this is the home of their hearts.  And they will make a new future here.

It’s no wonder to me that they don’t talk about the catastrophe of Daiichi Four or about the radiated water being dumped into the Pacific.  They care – but they can do nothing about these massive problems.  They can, however, come together and begin to repair their beloved land…

A partnership with the world is needed here.  To be a true partnership, it must be respectful.  Fukushima doesn’t need the rest of us to stomp in with arrogance.  We need to stand shoulder to shoulder, heart to heart.

Bob Stilger is the Founder and currently President of New Stories, a nonprofit that uses the power of story to help people regenerate community. After leading a local community development corporation in Spokane, Washington for 25 years, Bob’s work has stretched to many parts of the world including Japan, Zimbabwe, South Africa, Brazil, Australia. Co-President of The Berkana Institute from 2005-2009, Bob has a PhD in Learning and Change in Human Systems from the California Institute of Integral Studies. Since 2010 he has done extensive work in Japan, introducing collaborative spaces called “Future Sessions” as well as many participatory leadership processes. Eiji Press of Tokyo published "AfterNow: When We Cannot See the Future, Where Do We Begin" in June, 2015. New Stories published the English Edition in 2017. The current focus of Bob's work is helping communities transform after disaster strikes.