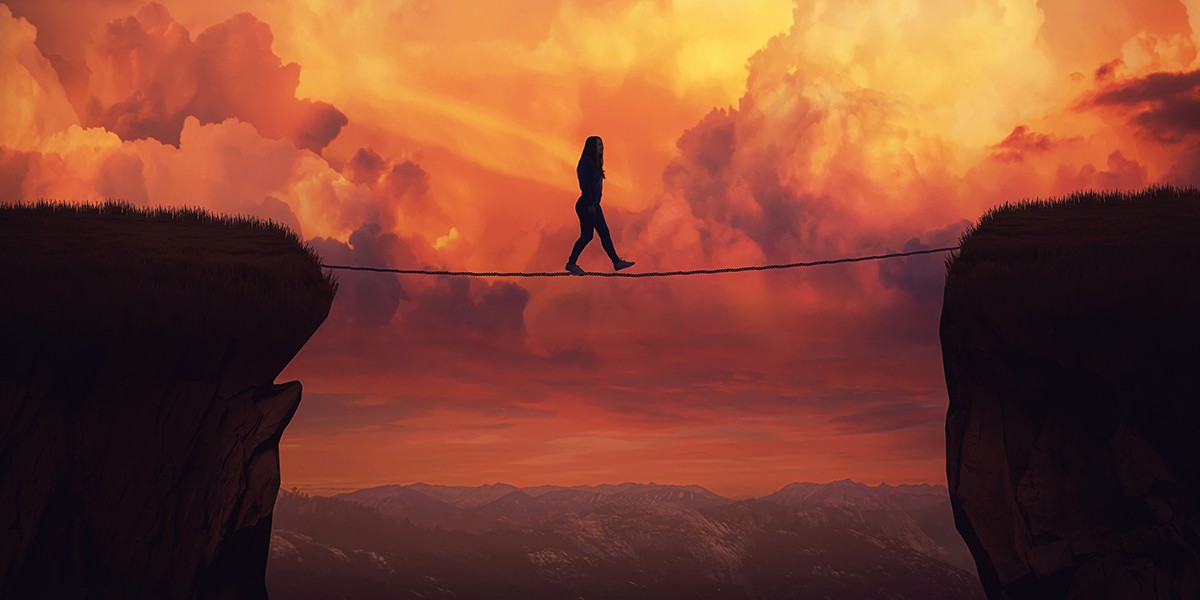 Walking the Line Between Denial and Despair

A couple of months ago, I received an email from Jenn Meilleur, our soon to be new Executive Director at NewStories. She was curious about an article she had received on Deep Adaptation or “adapting to likely collapse”.

Her question galvanized an outpouring of my thoughts that have been percolating for months on Collapse and Regeneration, which has become the emergent theme of NewStories work. For years now, NewStories has utilized the Two Loops map of a world in transition. The first loop represents the rise and fall trajectory of our current civilization, based on a set of worldviews and values which emerged in the Scientific Revolution of the late 1700’s. We talk about this loop as having peaked and being in decline.

The second loop shows the birth cycle of a new emerging civilization based on a different set of beliefs and values which offer a more integral model for our relationships to Earth and to other humans. Initially it too seems to decline before the new ideas and values systems begin to gain strength and become a new blueprint, a new possibility, a new kind of civilization for Humanity. This pattern parallels the metaphor of imaginal cells emerging in a cocoon initially being killed by the old cells before they get strong enough to coalesce into a butterfly.

The Berkana Institute, NewStories and others started developing this map almost 20 years ago. Quickly, a new element was added to the map beyond the two loops – a bridge where it might be possible for people to cross over to the regenerative curve of the second loop without needing to fall all the way into collapse or to have been part of the early experimenter work.

For most of its lifetime, NewStories has worked to strengthen the upward curve of the second loop and to build the bridge from one paradigm to another through story and on-the-ground community building. Our work has both emphasized support for those working in existing institutions on the first loop who are developing new approaches and those starting or continuing on the second loop. Both pieces are essential – keeping things working even as they fall apart and building the new.

Now we are rapidly becoming aware that none of us are going to be left out of the collapse of of multiple systems in which we live. Wars may be happening elsewhere, but fires, floods, hurricanes, bomb cyclones, tsunamis, crop failures, earthquakes and now pandemics are all around us. There is no way out of the experience of the collapse. We are already in it. Even those who may have bought their million-dollar apartments in underground bunkers in the desert are not going to be able to avoid the impact. No matter what your privilege, we are still all interconnected and when the food supply runs out, the grid goes down, communications stop, water runs out, and millions have a virus, we will all feel it. It’s essential that we learn how to hospice the passing of the old so it spews as little destruction and death as possible while we also midwife newly emerging patterns of compassionate caring and interconnectedness.

Nowhere is this more evident than in our current crisis of COVID-19. The collapse is screaming from the headlines. And simultaneously the regeneration is flooding my email box. Everywhere people are coming up with new ways to connect and communicate, creatively adapting to being together in new ways.

Our work over the next few months and years is to walk the line between denial and despair in ourselves and in our communities. Neither is an option. We must face the truth of the collapse that is unfolding and do our best to meet the challenges of rapid change without falling into despair. We need to feel our grief and also find our joy in celebration. I believe that holding the tensions between these opposites will eventually engender the transcendent function that will take us to a new, never before experienced consciousness. We must be brave and steadfast and take care of our ourselves and others. We each have choices to make, and the choices we make today determine tomorrow. May we continue to co-create the future we want to live in together.

2 thoughts on “Collapse and Regeneration”