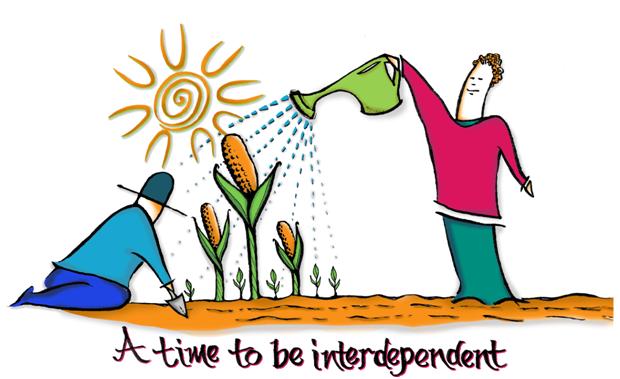 On this day, traditionally celebrated as the independence of our country, let us affirm that the times are calling for an embracing of our interdependence.

wishing you every blessing…

There are a number of versions of the Declaration of Interdependence. I have enclosed two:

Will Durant, Meyer David, and Dr. Christian Richard wrote it and launched a movement around it on March 22, 1945. It was introduced into the Congressional Record on October 1, 1945.

A DECLARATION OF INTERDEPENDENCE  among All People

Human progress having reached a high level through respect for the liberty and dignity of men, it has become desirable to re-affirm these evident truths:

Therefore, we solemnly resolve, and invite everyone to join in united action:

ROOTED in freedom, bonded in the fellowship of danger, sharing everywhere a common human blood, we declare again that all (wo)men are (sisters and) brothers, and that mutual tolerance is the price of liberty.

Created in 2013 by Betsy McKinney and the pro-democracy movement The Founding Family.

The Declaration of Interdependence

When in the course of human events, it becomes necessary for human beings to partner as never before in human history to declare that All Life is sacred and interdependent and to proclaim a new era in our nation based on the wisdom of using power in service to Love and for the good of All People and for the good of All Life, it is an enduring love for all of Creation that inspires this declaration.

Together, we now hold these truths to be self-evident:

That All People are Created with a brilliant array of diverse human characteristics and that every person has the inalienable right to equal treatment under the law.

That the inalienable rights to life, liberty, and the pursuit of happiness also include the rights to safe food, clean water, shelter, education, health care, protection, freedom of information and equal opportunity.

Together, we now affirm our responsibilities as citizens, given:

That this precious Earth is a living community of diverse, interrelated and interdependent life forms, and that we have the responsibility to maintain and restore conditions conducive to this web of life so that it may continue to regenerate its natural bio-capacity and continue its vital cycles and processes to create a wondrous world in its own right, and because human health is intricately dependent upon the health of the Earth and because we have a responsibility to conduct all human activities so as to preserve and protect this crucible of Life for future generations.

That it is the right and responsibility of all People for the good of All Life, to establish gender parity in decision making bodies, now and for future generations, in order that no gender may have an imbalance of power in governing decisions affecting the human family and All Life.

That democracy and communications media are interdependent, and restriction of either freedom of speech or freedom of the press is an oppression of The People, and given that whomever owns the media and determines its content has the capacity to manipulate public opinion, it is therefore the responsibility of the government to maintain integrity, diversity and truth in news reporting, and anti-trust statutes for media ownership so that it serves The People above private interest and profit, while upholding the constitutional rights of freedom of speech and freedom of the press.

That democracy and public dissent are interdependent as both are essential expressions of the will of The People, and that civil dissent is the inalienable right of every person and it is the responsibility of the government to protect by all possible means and provide reasonable public safety and conveyance for any and all non-violent, lawful public dissent.

That the electoral process is the fundamental expression of the will of We the People and the integrity of elections, including campaign finance and voting mechanisms, is essential to our democracy. Therefore, it is the responsibility of every generation to continue evolving the systems for transparency, freedom of corruption, and to better serve our democracy.

That to secure these rights and to fulfill these responsibilities, Governments are instituted by people, deriving their just powers from the consent of the governed, and that whenever any form of government becomes destructive of these basic rights and responsibilities, it is the right and responsibility of The People to alter it using legal democratic forms, or to engage in non-violent civil protest and if not successful, then to abolish it as necessary and institute new government, laying its foundation on such principles and organizing its powers in such form, as to them shall seem most likely to effect the safety, freedom, liberty and rights of All People and of All Life.

Declaring the Causes for such evolutionary changes:

From the birth of this nation, power has been held in the hands of a few. At the writing of our Constitution, We the People meant only a few privileged property owning, wealthy men while women, racial groups and indigenous peoples had no voice in debates of the day, had few or no rights, were denied personhood, were enslaved and/or considered property, and were subject to a long list of other disadvantages and oppression of historical record that prevented their full participation in our democracy, for more than half of our countrys history.

The material, legislative, judicial and economic advantages conferred upon property owning men institutionalized a system of privilege that has now resulted in the greatest concentration of wealth and power ever known, and is an imbalance of power that now threatens our democracy and the essential life systems of our planet.

Such is the necessity that compels this New Founding Family to call for the evolution of our democracy.

Whereas, this nation was founded in the political context of Imperialist expansion and in the context of slavery, the subjugation of women, partial or full eradication of native peoples and with nature considered as bounty to be used for unlimited private profit even to the point of extinction and loss of critical bio-diversity on the planet;

Whereas, our founding documents do not include the rights of all human beings nor do they speak about the rights of nature, or that humans have a responsibility to work together across all political and geographic and national boundaries to protect the environment and to preserve resources for future generations;

Whereas, the rights of All People and All Life and the principle of using power in service to Love is absent in our founding documents;

Whereas, the importance of insuring free and independent media is a responsibility of the government, and that the need for placing civic education and electoral integrity above the political process are all grave omissions in our original founding documents;

Whereas, people who have experienced genocide, holocaust, oppression, and exclusion from enfranchisement and power know beyond a shadow of a doubt that one faction of people dominating another is a waste of the human spirit that damages the soul of all people and that the earth suffers from the ensuing wars used to maintain power over one another and to defend against each other or to exploit and control resources;

Therefore we do declare as participants of a diverse global peoples movement taking place around the world:

That Truth and Reconciliation will bring about a restorative justice that can heal the past while rejecting the use of power to punish and seek retribution.

That while the magnitude of change necessary seems daunting, and while it is not assured that we can avert large scale social disruptions and calamities due to our collective actions of the past,

We do declare today that:

We are becoming resilient, compassionate, and interdependent communities ready for the changes taking place in our environment that are already upon us, and ready to change proactively to restore the biosphere, human health, our communities, education and democracy.

We, therefore, the undersigned people of the United States of America as The New Founding Family, do solemnly publish and declare, that the seminal ideals of equality, liberty and justice for all, that founded this nation have been gestating and we are ready to birth a new period of cooperation among all sectors of our society, to evolve our democracy as we enter the Age of Restoration in the United States of America, mutually pledging to each other and to the world our Lives, our Fortunes and our sacred Honor.

PrevPreviousToward a Larger Patriotism: Reflections for a Transformed Narrative for America
NextValley Fire – September 12, 2015Next