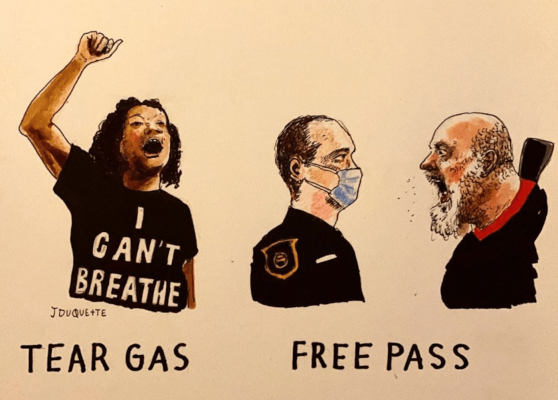 An article from Ola Caracola, first published on Medium on June 5, 2020

My newsfeed turned into a sea of black squares over the last couple of days, as I’m sure is the case for many of you, reading this.

Initially, this warmed my heart — I thought, YES, these are the kind of friends I want to have. All day, I contemplated sharing the same image, but the more I thought and read, the more I realised that, while initially well-intended, a black square won’t do very much for black lives. I decided to say something instead.

It’s taken me longer to write this than I had expected. I have found it exceptionally difficult to string together the phrases, which I feel might actually make a difference. I am not deluding myself into thinking that my words will have some huge, reverberating impact. Right-wing fanatics, extremists and bigots do not follow my page and my words will not reach them, and on the off chance that they do, they will likely fall on deaf ears.

Fascists, Neo-Nazis, and the kind of people who genuinely believe that they are superior to others thanks to the pigmentation of their skin, aren’t really the problem. This kind of racism is obvious, it’s loud and most people, not just in the US, but all over the world agree that it’s wrong. Too many of us, too easily consider ourselves allies to people of color. We would never describe ourselves as racists because we don’t have the Confederate flag hanging in our living room, we’ve befriended black classmates, and we shame Trump’s xenophobic remarks on social media.

While these are all plausible acts, unfortunately, they don’t mean that you’re not a racist.

There is a ingenious song, titled Everyone’s a Little Bit Racist Sometimes from Avenue Qn(a brilliant Broadway show I had the pleasure of watching since I couldn’t afford The Book of Mormon), and it goes like this:

I guess we’re both a little bit racist. Admitting it is not an easy thing to do…But I guess it’s true between me and you, I think everyone’s a little bit racist, sometimes. Doesn’t mean we go around committing hate crimes. Look around and you will find, no one’s really color-blind. Maybe it’s a fact we all should face. Everyone makes judgments…based on race.

You can find the full song (which only gets better) here:

In case puppets and parody don’t clear things up for you, Scott Woods shared a similar sentiment when he wrote,

The problem is that white people see racism as conscious hate, when racism is bigger than that. Racism is a complex system of social and political levers and pulleys set up generations ago to continue working on the behalf of whites at other people’s expense, whether whites know/like it or not.

I have friends who are people of color, I have dated and been intimate with people of color, and I would never support or vote for any initiative, which blatantly or subtly proposed any kind of discriminatory or racist practices. I imagine most of you, reading this, could make similar statements. But in my lifetime I have carelessly used the term my nig*a while speaking to a white friend, I have laughed at racist jokes, I have passed judgements about people who do not look like me without knowing enough about them and I refer to the corner stores in Barcelona as Chinos or Pakis, similarly to everyone I know in Spain.

So what does that make me? The events of the past week have made one thing incredibly clear: It’s not either you’re a racist or you’re not. As Padma Lakshmi explained on Twitter,

Racism is a spectrum with varying degrees of unconscious and learned behaviours reinforced by society every day. So, the correct question is to what degree are you prejudice, against whom, and why?

Not all white people are bigots.

But all white people consciously or unconsciously benefit from a system, which oppresses people of color. Our indoctrination with underlying racist ideals begins at birth and is so engrained in our culture that we may not even be aware of the biases we hold. Often our perception of people who look different than us is based on incomplete or all-together inaccurate stereotypes. We need to do better.

This does not mean that as a white person, you don’t struggle with the realities of life, it simply means that your skin color is not one of the things making it harder.

Not all cops are bastards.

But all policemen are employed by a racist and corrupt system, which was initially founded to track down runaway slaves, who were considered stolen property not human beings. The American prison system fuels mass incarceration and exploits predominantly black prisoners, who work for as little as 2 cents a day for companies like Verizon, Whole Foods, American Airlines and many, many more. It takes more hours of training to become a barber than it does to become a cop. Why the rush? There is no proven correlation between the number of policemen and crime rates. If any of this has peaked your interest, I suggest you pick up The End of Policing by Alex S. Vitale.

It’s uncomfortable to realise that we’ve been given better opportunities. It almost feels like it’s undercutting your accomplishments. I know, you worked hard to get where you are, this movement isn’t trying to discredit that. It just wants to give other people a chance to catch up; a chance for tangible not theoretical equality.

Implicit bias, cultural appropriation, whitewashing and white privilege are real. If you think that you haven’t experienced them, you are wrong, you simply haven’t realized, and that’s what forms so much of your entitlement.

The first time I heard about white privilege was at university in a class on race and gender. One example stuck with me, more than the others — Bandaids. Labeled as natural or skin-tone, they are exclusively produced with white people in mind, implying that anything darker is in some way unnatural and that a correct kind of skin-tone exists. I like this example because of its small, and insignificant nature. Who cares about the color of bandaids, when we compare it to things like police brutality? But it’s these small elements, the micro-aggressions that we, as white people are often unaware of, that pile up and work together to diminish the worth of a whole community in much bigger ways.

If you think that institutional racism is only a problem in the United States, think again.

Many of my friends in Europe don’t entirely understand how this issue effects them but as Europeans, we started this mess. Colonization began long before the United States drafted up their constitution. 52 out of 53 African countries have been colonised by white folk. But why should we be held accountable? Why should ‘nice white people who have black friends’ have to pay the price? Why not just the bad ones?

It’s frustrating, isn’t it? Being judged by the color of your skin. Judged by what your ancestors might have done.

White people, this moment isn’t about us. Not every fucking thing has to be about us. This is not our movement, because we don’t need one.

And that should make you happy. That is privilege.

As white people, we do not need to understand this pain — we can’t understand it. But here’s the thing — no one is asking you to do the impossible. Because truly, as hard as you might try, it is literally impossible to fully comprehend what it is like to experience systematic oppression that goes back entire generations. We do not need to understand something, in order to accept that just because we are not experiencing it on our own skin, it doesn’t mean that it is not taking place. (Reminder: the world doesn’t revolve around you!) There is an entire community of black people shouting their truth at the top of their lungs, and all you have to do is listen.

It is not up to us to tell black people how to protest and mourn and what to feel. What is described as riots in the US, is seen as uprisings by the rest of the world. The narratives we share matter. When history is written, it is always manipulated to tell a certain kind of story. It is up to all of us to write this one and pay our dues to the black community worldwide.

Besides physically showing up for protests, there are other, startlingly simple ways to show your support for the black community.

Your newsfeed is undoubtedly filled with petitions, book recommendations on the subject of race, and links for donations. Sign, follow, read, donate and amplify the voices, which have been silenced for so long. If you find it difficult to relate to black characters in books, tv or movies, take a moment to imagine how difficult it must have been for black children in the US and Europe, who are forced to partake in Eurocentric education to relate to the white characters, which have always been the focus of school and university syllabi.

So are you part of the problem? There can be no growth without discomfort. Remember, if you are learning about racism, instead of experiencing it, you are privileged.