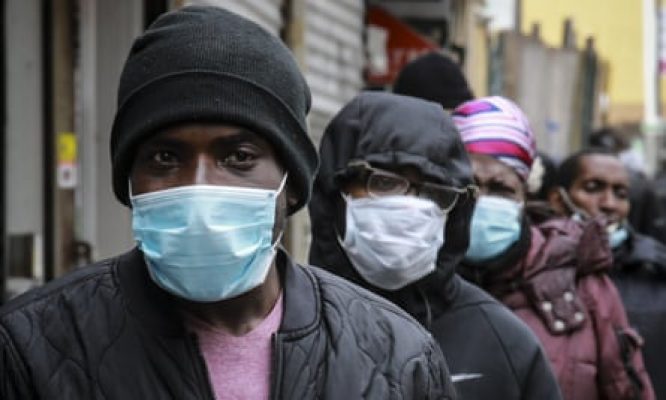 African Americans were already disproportionately affected by COVID-19, the disease that has swept across the globe in just months. Then George Floyd was killed by police in Minneapolis.

Even amid a pandemic, the injustice of police brutality and racism has pushed many people to the streets, causing them to jeopardize their health and, possibly, their lives from the coronavirus.

The coronavirus and police brutality — before and during the protests — together have a tremendous effect on the mental and physical health of African Americans, experts say. What has been the psychological toll?

Riana Anderson, PhD, an assistant professor of health behavior and health education at the University of Michigan, addressed the stressors that African American communities face on structural, interpersonal, and individual levels.

“Wealth disparities between black communities and others are stark, such that less disposable income and generational wealth diminish the amount of resources that can be effective at combating COVID,” she says.

Among African American youths, Anderson says, the suicide rate is high, and COVID-19 may make it worse.

APM studied coronavirus deaths from 40 states and the District of Columbia. Its research found:

The protests around the country were kicked off by the May 25 death of Floyd, a black man. Former Minnesota police officer Derek Chauvin, who is white, used the weight of his body to press down on Floyd’s neck, killing him. The death followed the killings of Breona Taylor in her apartment, due to an allegedly botched drug bust, on March 13, and Ahmaud Arbery, who was hunted down and killed on Feb. 23 in Georgia by two white men while another recorded it on his cellphone.

With the virus spreading through their neighborhoods, Anderson says, African Americans had more depression, fear, and anxiety. Thousands of African Americans across the country never stopped working during this pandemic.

.@CHCShealth stands alongside the Black community and calls for racial justice after the killings of George Floyd, Breonna Taylor, Ahmaud Arbery and countless others. CHCS works to achieve health equity — there’s no health equity without racial justice. https://t.co/43grmBYWld

According to a 2019 study by consultant group McKinsey & Co., African Americans are overrepresented in fields like food services, office support, and production work. They were deemed essential workers, and, with little choice, continued to work. This contributes to those feelings of fear and anxiety.

“Without adequate time or resources to express their frustration or challenges, they may need to internalize such emotion, actually availing themselves to more compromised immune systems and, again, becoming at risk for contracting and/or transmitting the disease to their loved ones or colleagues/clients,” Anderson says.

Patrice Harris, MD, immediate past president of the American Medical Association, says COVID-19 worsened the mental and physical health problems that African Americans were already having.

“Pre-COVID-19, in the last 8 to 10 years, we have seen an increase in the number of suicide attempts in our African American youth, increased reports of stress and anxiety in African Americans in general and, unfortunately, we have also seen an increase in a [lack of] access to mental health care,” she says. “That is the foundation from which we have entered … [the] COVID-19 pandemic.”

Since the pandemic came to the United States, Harris says, much of the country has shown signs of more anxiety, stress, and worry. “If you add that to the foundation that we have pre-existing conditions around health and equity, then it just adds to the level of stress, anxiety, and trauma felt by the [African American] community.”

The numerous first-hand accounts of police brutality and violent and discriminatory encounters negatively affect African Americans’ mental health. According to a study by the American Public Health Association, police stops perceived to be unfair and discriminatory are connected to anxiety, depression, and posttraumatic stress disorder.

“Neighborhood-level frisks and the use of force were linked to elevated levels of psychological distress among men living in these neighborhoods,” according to the study.

African American neighborhoods that have gone through “high rates of law enforcement use of force were at increased risk for diabetes and obesity,” it found.

Harris says toxic stress is also the result of police violence. This kind of stress is different from what Harris calls everyday stress. In both cases, there is a physiological response: a higher heart rate, and the release of cortisol and other hormones. But toxic stress — the result of abuse and mistreatment — can lead to changes in the brain and immune systemthat worsen mental and physical health.

“We have seen … this in communal violence,” Harris says. “We have seen these reactions if you are the direct recipient of abuse or witness to abuse. I think that is what is happening right now, in particular with the African American community, a sense of that communal abuse from police brutality. It’s just one more insult, one more stressor in addition to those day-to-day micro-insults, if you will, of structural racism.”

Living in an environment with a lack of access to doctors, more pollution, fewer sources of fresh and healthy food, and an earned distrust of police can be a sign of systemic racism that leads African Americans to experience racial trauma.

This country has to commit to moving through this experience. Institutions would have to look at policy and their own structures to make sure there are equitable opportunities for everyone to be healthy, and to be able to live and walk without fear.

“Racial trauma, or race-based stress, refers to the events of danger related to real or perceived experience of racial discrimination,” says a study in the journal American Psychologist titled “Racial Trauma: Theory, Research, and Healing.”

“These include threats of harm and injury, humiliating and shaming events, and witnessing harm to other [people of color] due to real or perceived racism. Cumulative racial trauma can leave scars for those who are dehumanized,” it says.

Racial trauma contributes to negative health outcomes for African Americans, which may lead to non-genetic pre-existing conditions. In an interview with The Cut, a women’s magazine, Erlanger Turner, PhD, an assistant professor of psychology at the University of Houston-Downtown, says not every incident of racism leads to racial trauma, but is still a factor. The following conditions can be a result of racial trauma and are disproportionately experienced in African American communities:

What Can We Do

In terms of getting help to deal with toxic stress, Harris, the former head of the AMA, says African Americans should try to take care of themselves as best they can, and try to seek help when they need it. But, she stresses, this situation will not solve the problems of systemic and structural racism.

“This country has to commit to moving through this experience,” Harris says. “Institutions would have to look at policy and their own structures to make sure there are equitable opportunities for everyone to be healthy, and to be able to live and walk without fear.”

“It is going to take more than the black and brown communities to do this,” she says.