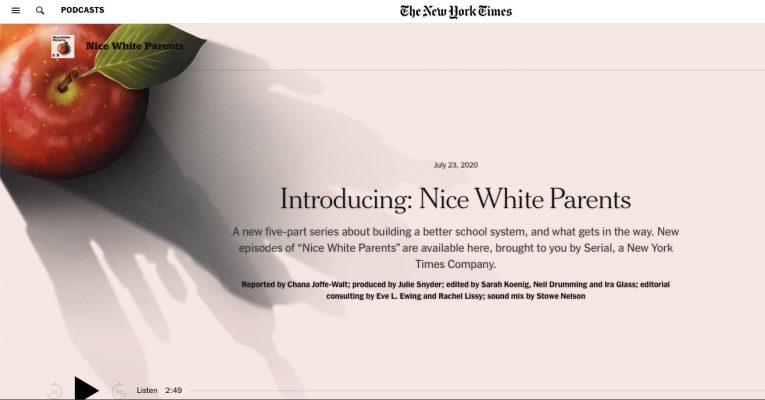 We know American public schools do not guarantee each child an equal education. Two decades of school reform initiatives have not changed that. But when Chana Joffe-Walt, a reporter, looked at inequality in education, she saw that most reforms focused on who schools were failing: Black and brown kids. But what about who the schools are serving? In this five-part series, she turns her attention to what is arguably the most powerful force in our schools: White parents.

NewStories contributor had wrote about this podcast in a recent blog:

For eight years I had been practicing exercises to calm my anxious body. As a result, I have metabolized stuck energy from personal trauma and protective patterns from childhood that no longer serve me, opening up space inside for the healing and growth of my nervous system.

Then I heard Resmaa Menakem (author of My Grandmother’s Hands) on a podcast describing the work I’d been doing on a personal level but through the lens of race. In the wake of the brutal killings of Breonna Taylor, Ahmaud Arbery and George Floyd and the ensuing protests, I had been asking myself, “We’ve been here before. What is it really going to take for this country to overcome the racist design of our culture?” After listening to the podcast, I knew deep down in my bones that for true racial healing to begin, we must heal our nervous systems and our reptilian brains that react to keep us and our loved ones safe in a society in which bodies of different colors distrust and fear one another.

Now, as I read books, listen to podcasts and watch movies and the news, I am especially tuned into my body and the bodies of other white people and the unconscious ways we wield power and privilege out of fear. The New York Times’s podcast Nice White Parents portrays a vivid example of this.

In this five-part series we follow I.S. 293, a public middle school in Brooklyn, over the course of 60 years. From Brown v. The Board of Education to the present, the school failed to meet its legal obligation to integrate its student population — primarily because of white liberal parents’ intentions to do just that.

Through extensive research and interviews, Chana Joffe-Walt lays bare the power progressive white parents unconsciously wielded at the school over six decades. White parents whose children didn’t gain acceptance into one of the “Big Three” predominantly white schools considered the best in the district, faced the possibility of sending their children to schools with Black and Brown students. Schools they were afraid to send their children to. In the 60’s they lobbied collectively to have I.S. 293 built near their homes so their children could attend an integrated school. But, in the end, they chose not to send their children there. And in subsequent decades new generations of white parents continued to recreate I.S. 293 under the banner of integration. But every time, the changes they fought for, pulled strings for, and raised funds for benefitted their children only.

The series is a call for white-bodied people to examine their motives and power particularly in the educational system, though the lessons apply universally.

As you listen, I encourage you to pause and check in with your body. What sensations or feelings come up when something as natural as wanting every advantage for your child means other children are disadvantaged? What do you feel when it’s made plain that “the best” school is code for “white school?” What shows up in your body when you listen to Black and Brown parents describe what they want for their children?

It’s easy to judge others and ourselves, so please feel into these sensations with compassion. And let the healing begin.