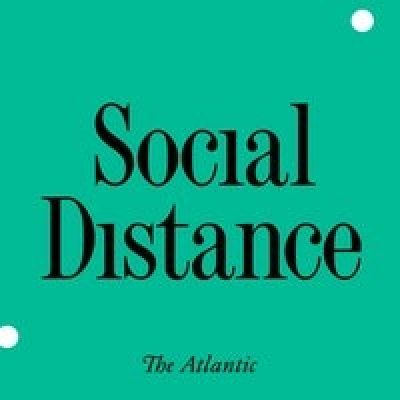 On this episode of the Social Distance podcast, James Hamblin and Katherine Wells are joined by Adam Serwer, who explains the connection between the shooting of Ahmaud Arbery in Georgia and the racially disparate outcomes that have emerged from the coronavirus pandemic.

Subscribe to Social Distance on Apple Podcasts, Spotify, or another podcast platform to receive new episodes as soon as they’re published.

What follows is an edited and condensed transcript of their conversation.

Katherine Wells: For people who aren’t familiar with the Arbery case, can you lay out the basics?

Adam Serwer: Ahmaud Arbery, who was a black man in Georgia, was shot by two men who saw him running through the neighborhood and believed that he was up to no good and pursued him. You can see the video online, although it is not for the faint of heart. What happens in the video is that these men are already in front of Arbery and have their guns out. As [Arbery] approaches them, he tries to wrest the firearm from one of the men, who shoots him. The initial response of the Georgia district attorney for the area was that there was nothing wrong here, because [the two men] were making a “citizen’s arrest.” So they were justified in self-defense because, after all, [Arbery] had tried to grab the gun. Now, this doesn’t make sense to the average person, because they saw a guy running and they armed themselves and stalked him. At that point, it’s the person who is unarmed and who’s being chased by two armed men who’s really in the position of being able to act in self-defense.

The facts of this case are very similar to the Trayvon Martin case, in which the defendant was acquitted in large part because of the terms of the stand-your-ground statute, [under] which, essentially, from a legal perspective, it is much easier to get acquitted of murder if you shoot the victim and they die, because then you don’t have a witness to your behavior. Which creates a perverse incentive here. But in this case, there was a video. The video, rather than defusing the tension over the case, caused a national outrage, which then caused a different district attorney to bring the case to a grand jury and arrest the two suspects. Who, in case it’s not clear, were two white men, a father and son.Wells: So no one was arrested for it—it wasn’t charged as a crime for two months? Until the video came out?

Serwer: Right. And the district attorney in the area determined that everything that happened was fine, there was no criminal anything involved here that was worth investigating. It should be said that that same district attorney twice tried to prosecute a black grandmother for helping someone who had just registered, and was voting for the first time, to use a voting machine. So this is not a particularly lenient prosecutor. He just has what you might describe as an idiosyncratic view of what counts as a crime and what doesn’t.

Wells: We’ve been talking about the Before Times, as if in mid-March the old world ended and we came into the new world, which is coronavirus world. When this story became national news about Ahmaud Arbery in Georgia, the surreality of the world we’ve been living in was shattered. How are you thinking about this?

Serwer: If you have a train track, it goes to specific destinations. If you put a brand-new Acela train on the train tracks, it might get to one place or another faster. It might be more comfortable than the old train that you used to have. But it’s only going to go to the same places that it used to go. When you look at the coronavirus world, it is entirely shaped by the structure of the before world. All of the racial inequities that were in the before world, they are naturally being reproduced in the coronavirus world because the structure of our society was built along those tracks. You can put a new train on it; you can send everybody $1,200; you can try to put out $600 million for small businesses. But because the train is going to go to the same destinations, you’re going to have 90 percent of black and Hispanic small businesses being denied loans. You’re going to have a disproportionate number of workers in service and health-care industries being black and Hispanic people. The train is going to go to the same destination no matter how new and shiny it is, because that’s where the tracks are built to go.

Wells: What are the tracks? How are they built?

Serwer: This is a big part of the piece that I just wrote for The Atlantic about how the racial disparities in coronavirus sickness and deaths have influenced the response among elite Republicans, particularly Fox News and the Trump administration. The general metaphor for it is something that a philosopher named Charles Mills came up with: He calls it the racial contract. The racial contract underlies the social contract. One of the early examples is the Declaration of Independence, which we have since interpreted to say everyone is created equal. But at the time, what it really meant was landed white men with property are all created equal. Maybe some of the Founders at the time aspired to that larger sense. But the collective meaning, in the way that American society was constructed, really referred to white men with property.There is an unspoken way of looking at the rules that understands tacitly that the rules apply to white people differently than they apply to everyone else. And you can see that in the example of this prosecutor, [for whom] a black woman helping someone vote is a crime, and two white men stalking and gunning down a black man who they suspect of committing a crime is not a crime at all and not worth an indictment. The racial contract is the way that racism can function in a society without explicit terms defining things as racial.

Wells: Those are the tracks. Invisible tracks.

Serwer: I wouldn’t say that they’re invisible. I would say that they are unacknowledged for obvious political reasons. Because that’s the only way something like this can function in a society that is based off the idea that we’re all created equal. You can’t explicitly say “But these people don’t count” if you want to say that you believe in this universalist idea, which is at the core of American identity.

Serwer: If you somehow woke up Emmett Till after all these decades, and you explained to him that a prosecutor in Georgia who prosecuted a black woman for voting also refused to prosecute two white men for killing a black man, he would say, “Yeah, that sounds right.” There is a dark consistency, particularly in instances of violence that are based on a perception that a black person has created a threat that must be neutralized with lethal force.

A couple of things have changed. White Americans, by and large, regardless of their political orientation, are much more willing to see the way that this works than they have been in the past. There’s some resistance to it now among conservative commentators. But I would say that almost every prominent conservative pundit who watched that video and who read about the circumstances of the case thought, Well, this is actually an injustice. That gets more difficult when police are involved, because of the conservative ideological orientation toward police.

But two things have happened: People are increasingly in denial about certain things that are obviously racialized for partisan reasons, the president being one of them. But another thing is that when those incidents do not have clear ideological stakes, it is actually much easier for white people across the political spectrum to identify something that is a racial injustice, because it looks so familiar to moments in our history that we have come to think of as shameful, collectively.James Hamblin: How are you seeing the racial contract play out in terms of coronavirus?

Serwer: When you look at the way that [some officials] talk about, for example, workers in meatpacking plants, or the way that they’re talking about states where the racial disparity has been extremely lopsided, you saw a pretty big tone shift from the White House and from Fox News after the news about the racial disparities came out, which was basically, Oh, this isn’t really our problem. This is not affecting the people that we consider our people.

This is not a dynamic that’s particularly unique to the coronavirus. It applies to a lot of serious social problems. If you go back to 2010, when the Democrats were trying to pass the Affordable Care Act, one of Rush Limbaugh and Glenn Beck’s talking points against it was they were calling it reparations. There’s this whole idea of saying, “Oh, this is those people’s problem and not your problem.” In some ways, it can manifest as an almost unconscious mechanism: It’s not going to hurt me; it’s going to hurt them. So what’s the big deal? But sometimes it is conscious.

Because I’m not a mind reader, I wouldn’t be able to tell you which happened here. But part of the strength of the racial contract as a concept is that it works by people implicitly understanding the rules and by the train following the tracks, regardless of how new the train is. People are acting out the implicit terms of the racial contract without even thinking about the fact that that’s what they’re doing.

Hamblin: There are the racial disparities in who’s most likely to contract the disease, to have severe outcomes, or to die from it. We’re seeing, in New York for example, 80 percent of the summonses that have been issued for social-distancing violations were given to people who were black or Latino, even though we’ve also clearly seen instances of packed, primarily white neighborhoods that were not being cracked down on.

Serwer: The racial contract shapes the thinking of people who are liberal and conservative. New York is a great example of this because [Mayor] Bill de Blasio is a liberal Democrat. And he’s not only a liberal Democrat, but he won the Democratic primary in part because of this striking ad about stop-and-frisk. One of the things that de Blasio said was, essentially, “I understand how this kind of systemic inequality works, even though I’m a white guy, because I have a black son. And I don’t want him to be stopped by the police just because he’s black.” What you’ve seen in New York is this mayor who has this incredibly personal connection to the question of unequal enforcement of the law and how it disadvantages people of color, who is essentially presiding over an administration in which white people standing too close together in Lower Manhattan are getting handed masks by police and black people in East New York are being thrown to the ground. It’s really striking because, again, the train follows the track. This is how this works. This is how this works because that’s how it’s built to work. It’s very difficult to change the direction of the train if you don’t build another track.