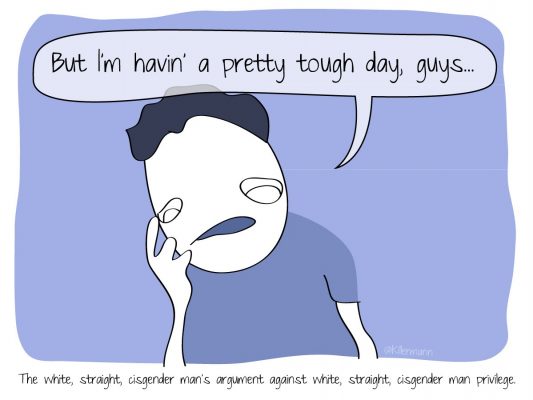 Michael Quinn Patton has played a key role for many years now in “complexity aware evaluation.” Developmental Evaluation, Principles-Based Evaluation and Utilization-Focused Evaluation.  In his work shared here, he points out that the social justice issues being addressed in our world at this turbulent time are mammoth, reflecting long-standing structural and systemic racism. Privileged straight white males have been guardians of such systems, purveyors of it, whether intentionally or unintentionally, and have benefited from it, including myself. This is about the transition from Straight White Males RULE to rules for straight white males.

His blog post  shares the rules for straight white men that he has developed with others, as will as the Context for these rules which is share below.

“So, for you guys, are you willing to discover and educate us on how white men can confront white men effectively? What have you learned? What has worked? Has *anything* worked?…

“Thank you for getting your white boy. And when you figure out how to get through to white boys, would you share your findings with the rest of us who are TIRED of banging our head against a crooked wall?”

So I take Rita’s question to be serious, and my response is serious — not a joke, not tongue-in-cheek, not sarcastic, and not another “awful musical rendition.” Whether it turns out to be bullshit you’ll each judge for yourself.

1. New rules but not my rules. The rules for privileged straight white males are not my rules. I’m reporting what I’ve come to understand are the rules from many sources I’ve encountered, including postings on the EvalTalk listserv. I take responsibility for the way in which the rules are worded and interpreted here, but substantively these are not rules I’ve made up. Many of you reading this have contributed to them.

a. Rules focus on behavior. Time is of the essence. Transformation is urgent. Education, dialogue, discussion, and deepening understanding are all worthy and desirable processes and outcomes, but the bottom line is changed behavior and systems change. After decades of trying to educate men about sexual harassment, the movement has come to focus on enforcing behavioral rules. Men may or may not “get it” about what constitutes sexual harassment, but acceptable behavioral rules are now stated and increasingly enforced because of the consequences and penalties for those institutions that do not enforce the rules. That’s both individual and systems change, the two being mutually reinforcing.

b. The transition from Straight White Males RULE to rules for straight white males has to be, at least in part, about rules: what the new rules are, who makes them, and how they are enforced. Rules will get the attention of straight white males because they know about rules in their role, formal or informal, known or unknown, as rulers, and have enjoyed a world where rules are for others not them. They will therefore take umbrage at being presented with new rules that are about them and that will at least get their attention, which, as those who engage with straight white males know, is a large part of the battle.

4. Rules not principles. I have spent a great deal of time in the last decade thinking about, distinguishing, and writing about rules versus principles. I’ve advocated a principles-focused evaluation approach for supporting innovations in complex dynamic systems. The first half of the book I did on Principles-Focused Evaluations is about the difference between rules and principles. Rules, as noted above, are simple and behavioral. A STOP sign means stop. No judgment is involved. No interpretation is necessary. STOP means stop. In sexual interactions NO means NO. Principles require judgment, contextual adaptation, interpretation, and thinking. Defensive driving is a principle. In sexual interactions, mutual consent is a principle. Because many appear to have difficulty interpreting and applying this principle, institutions, like universities, have had to convert the principle to a rule that where power and status imbalances exist, mutual consent is not possible and is therefore not a defense when allegations of harassment arise. One can hope that social justice and equity transformations usher in a principles-focused world based on mutual respect, valuing diversity, meaningful inclusion, shared power, and authentic equity for all – but in the interim, straight white males cannot be trusted to understand and appropriately interpret principles, so they need the concrete and unambiguous guidance provided by rules.

5. Assertive, even aggressive, tone and style. Remember this is an encounter between and among straight white males, especially, perhaps mostly, Western-culture straight white males. That is not a culture of subtlety, nuance, or sensitivity. It is a culture of aggression, assertiveness, domination, winning, and control (see any action movie or video game for confirmation). The formulation and aggressive tone of the rules reflect that culture. They will be off-putting to those who, appropriately, abhor that culture. Stating the rules in those cultural terms makes them less ambiguous and more attention-grabbing.

6. Standing Rock Inspiration. I take inspiration from several sources that I’ve encountered in deliberating on rules versus principles. One of the most notable is the set of rules formulated by Native American leaders who organized the Standing Rock protest against the oil pipeline. The Standing Rock Sioux and the Oceti Sakowin leaders had to deal with substantial numbers of white supporters coming to join the protest. They established rules for those supporters and created a training orientation to explain the rules. Adapted versions of some of these will be recognizable in some of the rules for straight white males. The diplomatic public version of the Standing Rock rules can be found here.

I’ve talked with several people who went through the training orientation at Standing Rock and the version they received was more concrete and assertive. Two examples as told to me:

7. Personal experience informing the rules. As noted above, the rules for straight white males reflect my own ongoing journey as a privileged straight white male, some of which I’ve written about. This article in the American Journal of Evaluation appeared two decades ago as part of an AEA forum on “Some Framing Questions About Racism and Evaluation.” That forum provides one kind of baseline for where things were some 20+ years ago.

To get an up-to-date view of where evaluation has been and where it is now with regard to “the construction of race in and through evaluation,” Dr. Vidhya Shanker’s dissertation is essential reading (University of Minnesota , 2019).

8.Rules are inherently over-generalizations. We evaluators are trained to avoid, detect, and detest over-generalizations. Forget about it. Overgeneralization comes with the territory of rules. Nuances and variations in application come with principles. Rules, in contrast, are universal for those targeted. That’s part of the resistance and umbrage. Indeed, let me offer just such an overgeneralization as part of this context: most straight white males will see themselves as worthy exceptions to these rules because, as individuals, they know themselves to be different. Even though they may recognize the problem with other straight white males, the new rules don’t apply to them, or, even more self-delusional, they may assert and argue that they are already in full compliance. That sense of individuality, exceptionalism, and entitlement is the very reason that the rules must be stated as universal. One of the rules is that there are no exceptions to the rules. That applies to me as well.

9. Facilitation rules. Rita and I, with many others, share an interest in facilitating evaluation. She co-edited a volume of New Directions for Evaluation on “Evaluation and Facilitation.” She has written eloquently and insightfully, in my view, about “dancing with dynamic tensions” when facilitating. A common facilitation practice when beginning to work with a group is to establish shared norms and rules at the beginning of the process, posting them, and referring back to them periodically throughout the group’s work together. These rules for straight white males, in contrast, are not a matter for co-creation. They are, as you will see, to be presented as firm, absolute, and not up for discussion. They may or may not be understood, but they are to be complied with.

10. An incomplete list. I’ve offered 10 contextual considerations. I’ll offer 10 rules for privileged straight white males. The list is incomplete, a starting set (kindergarten level), far from exhaustive. Others may want to add their own rules. Bring them on.

I noted above that in interacting with female colleagues and colleagues of color about what needs to be done to support a more just and equitable world, I have regularly been advised, indeed urged and instructed, that the greatest help I can offer is to take on other straight white males.

Many are reiterating this point at this time. Those calls for engagement, including on the EvalTalk listserv, are part of the context for the rules that follow in Part 2. Here is a powerful and moving example that appeared today (June 5) from Dax-Devlon Ross, an African- American police officer in “A Letter to My White Male Friends of a Certain Age.”