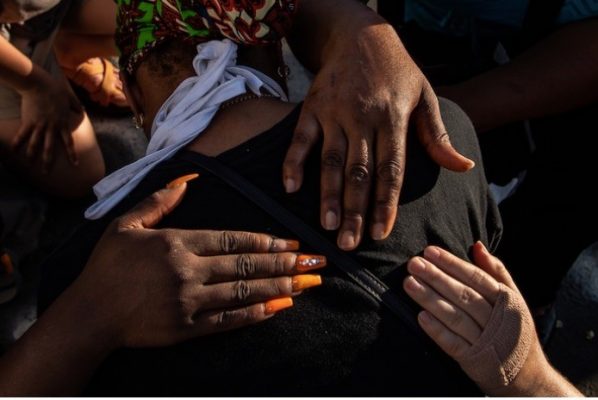 I am 10 and watching my grandfather’s back stiffen and shrink as an officer pulls us over on the way home from the mall. I am 16, facedown on the hood of a cruiser in Ewing, N.J. I am 22 and sitting in the back of a car at night with my palms pressed against the driver’s seat headrest in an empty lot off a feeder road outside Houston as two officers shine flashlights into our eyes. I am 36 in a Main Line Philadelphia neighborhood, crying in my car when an officer taps my window because someone in a nearby house has called about me. I am 42 and watching the news of George Floyd, the latest racial killing, unspool across TV and social media. And as I watch, I am 10, 16, 22, 36 all over again, all at once.

I am also experiencing another time loop, though. Once again, as the latest racial travesty pierces our collective consciousness, I watch many of my white friends and acquaintances perform the same pieties they played out after Trayvon, Eric, Sandra, Korryn, Botham, Breonna. They are savvy, practiced consumers of Meaningful Things: They’ve listened to “Serial” and become expert critics of our broken criminal justice system after just one season. They’ve watched “Insecure” and can suddenly imagine life as Molly or Issa. They’ve shared the preordained “amplifying” social media post that just reads “This,” followed by a link to something profound from a black voice.

But those actions are fraught: Book clubs, for instance, are comfortable gatherings of friends who are unlikely to nudge one another to the places of discomfort that these books, at their best, demand. Who wants to damage a relationship over something as abstract and removed as racism? Learning about new perspectives and the ideas underlying them is great; wanting to discuss them among friends in safe spaces is understandable. But outside the window are people marching to the beat of a different drum.

Social media has become the marketplace for these kinds of performances. It’s where people write long posts about the need to examine white privilege, to “name white supremacy,” and to either proudly denounce family members or call them in to conversations. And yes, there are the virtual book clubs with names like “Anti-Racism Book Club,” “White People Reading Book Club” or “Combating Whiteness Book Club.” It’s all impossible to miss, thanks to the way the algorithms of my feeds leap to attention when American racism is at its highest. Sometimes I’m even tagged, texted or invited to join in. On more than one occasion, I’ve been asked to attend discussions with earnest titles along the lines of “White People Townhall” or “We Need to Talk About Race” or “Combating Whiteness.” On other occasions, I’ve been solicited for resources (“trying to build a resource list for white allies to read so tagging some people who might have suggestions”).

Because I’ve been here before, I know what happens next. In a handful of Sundays, my social media feeds will no longer have my white allies “This”-ing, or unpacking their whiteness or privilege, or nudging their kids to put down their tablets and march. Their book clubs will do what all book clubs do: devolve into routine reschedulings and cancellations; turn into collective apologies for not doing the reading or meta-conversations about what everyone should pretend to read next; finally become occasional opportunities to catch up over wine. It is hard and harmful to know that all of this keeps them in a comfortable place, even if doing just a little feels like a reach when the Race Alarms are sounded.

I’m your black friend, but I won’t educate you on racism. That’s on you.

Right now, many of my black friends are also experiencing the temporary phenomenon of the Outreach: a surge of “checking in” texts and emails, gifts, meals, and private DMs giving — and sometimes even seeking in the same message — support.

This is the racial ouroboros our country finds itself locked in, as black Americans relive an endless loop of injustice and white Americans keep revisiting the same performance, a Broadway show that never closes, just goes on hiatus now and then. This is our own racial ouroboros. The chaos we see now stems in part from the chaos foisted upon us for generations. The injustice we protest isn’t rooted in just police killings; it lives also within housing and school choices; social and professional networks; the defunding of nonwhite organizations; the demotion and firing of black employees; the microaggressions and slights that happen at dinner parties, restaurants, cafes and concerts.

I’d like to think that well-meaning, invested white people are really gathering to talk about books to instruct themselves on how they can do more and do better, but it’s hard to believe that that’s really what most of them are working toward. You’ve had access to instruction about black humanity, freedom, mobility, happiness and health since we were brought here. It stretches as far back as slave songs and Phillis Wheatley poems and carries through Black Lives Matter activism. You’ve had your chance to say “This,” over and over again. Now act.

Police killing black people is a pandemic, too

The right acknowledgment of black justice, humanity, freedom and happiness won’t be found in your book clubs, protest signs, chalk talks or organizational statements. It will be found in your earnest willingness to dismantle systems that stand in our way — be they at your job, in your social network, your neighborhood associations, your family or your home. It’s not just about amplifying our voices, it’s about investing in them and in our businesses, education, political representation, power, housing and art. It starts, also, with reflection on the harm you’ve probably caused in a black person’s life. It may have happened when you were 10, 16, 22, 36 or 42. Comforting as it may be to read and discuss the big questions about race and justice and America, making up for past wrongs means starting with the fact that you’ve done wrong in the past, perhaps without realizing it at the time: in the old workplace, neighborhood, classroom, softball field. Maybe even the book club.

I am at a beer garden in Fishtown when the Trayvon Martin murder case reaches its conclusion. I am home in bed, curled like a question mark, crying over the news that Philando Castile has just been shot in front of his partner and their child. Freddie Gray is dead and I am standing in the district office of the Camden City School District, mourning with black co-workers. And I am all these things at once again when I watch my white colleagues, friends, acquaintances and long-ago classmates reopen this time loop. Still learning how to be allies yet never making amends to us.

The confusing, perhaps contradictory advice on what white people should do probably feels maddening. To be told to step up, no step back, read, no listen, protest, don’t protest, check on black friends, leave us alone, ask for help or do the work — it probably feels contradictory at times. And yet, you’ll figure it out. Black people have been similarly exhausted making the case for jobs, freedom, happiness, justice, equality and the like. It’s made us dizzy, but we’ve managed to find the means to walk straight.

On my stroll to my voting place on Election Day in early June, I rounded a corner of City Hall and saw not only two dozen armed National Guard troops but a black woman slow-riding her bike in wide, dreary circles that created a miniature ouroboros, bringing her closer and closer to the fenced line of soldiers that drew me in, too. As she completed her first arc, I was able to read the sign taped to the handlebars. In red, white and blue letters it read, “No YOU do better.”