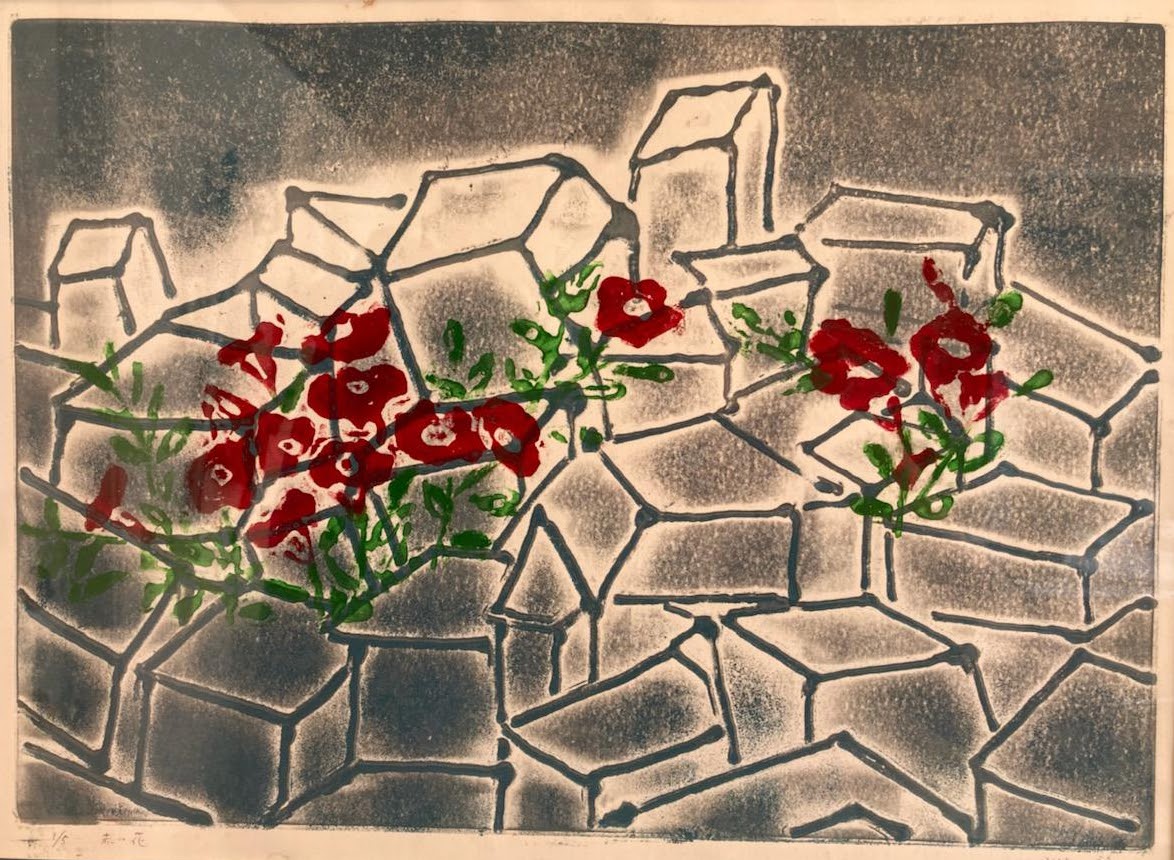 Six weeks after Japan’s Triple Disasters of earthquake, tsunami and nuclear explosions, Kyoto artist Keiko Yoneyama volunteered to go to the disaster area to create artwork with kids living with their families on the floors of gyms. Walking along the ocean one morning, she saw sea walls, destroyed by the tsunami, jumbled in a huge pile, just as the ocean had left them. Red flowers were already blooming out of the destruction and Keiko was so moved that she created this woodblock print.

How do we grow the bounty of flowers ready to spring forth in our communities? In times of catastrophic disasters – and in all other times as well — how can we step forward to create the lives and communities we want? Government and large institutes can be allies (or adversaries) in the work of creating healthy and resilient communities. But change is created by people who mobilize around hopes and dreams and possibilities.

NewStories invites community activists, leaders and change-makers to deepen your ability to call forward the leadership needed for regenerating community. Beginning in April, over a six week period, we will offer a series of three 3-hour training workshops on inviting, sustaining and co-creating with the leadership our communities need now.

The evening of March 31st, 6:30 – 8:00pm Pacific Time, we invite you into a conversation to co-design this training with us. This session is free.

The base price for training workshop series itself will be $450. If you can only come for part, you are free to drop in for $200/session. We’ll work with you to find a price that works for you and us if you’re funds are tight. We’ll welcome a higher price from those who have extra cash.

For 20 years now, NewStories has worked in communities everywhere. We’ve made a difference in our heart homes of Whidbey Island, Vancouver Island and Spokane. We’ve worked in communities across the Pacific Northwest and Northern California. Our work with climate disasters has taken us into High Rivers Alberta, Cedar Rapids Iowa, and numerous communities in Northern California. We’ve been called to communities in many parts of the world – Australia, Philippines, India, Zimbabwe, South Africa, Mexico, Brazil and Greece where people are creating their Next Now.

As NewStories friends know well, our work in Japan for six years after the Triple Disasters of 3.11.11 created a deep attunement for the possibilities hidden in disaster.

Bob Stilger is the Founder of NewStories. He has worked for decades in many places and contexts to help people build healthy and resilient communities. In the early part of this century he began to focus more and more on places of disaster and collapse, first  in Zimbabwe and many parts of the Global South, and then in Japan. Six years after extensive work in Japan’s Triple Disasters of March 11, 2011,  he wrote the book, AfterNow: When We Cannot See the Future, Where Do We Begin. AfterNow provides many stories, methods, and tools for post-disaster way-finding and regenerative community building. Over the past 3 years, Bob has also worked in many of the fire affected counties of Northern California. Since 2018, he has facilitated the convenings of First People’s from Alaska, Louisiana, the South Pacific, and other parts of the world who have been forcibly displaced from their lands by the climate crises.

Jenn Meilleur is the Executive Director of NewStories. She is a systems change facilitator, sense-maker and strategist. Her passion is for cultivating bold, creative, and participatory leadership to create the conditions for happier, healthier, more environmentally and socially just and resilient communities and workplaces. She has two decades of experience supporting and leading initiatives and collaborative networks at the intersections of social and environmental health and wellness, community development, organizational development, and systems change. Jenn finds her inspiration in nature on the unceded traditional lands and waters of the K’omoks Nation on what is known as Vancouver Island with her husband, two children, and many four-legged friends.

Use the form below to register for this event. Please select a price and submit the form. You'll receive an email with event details once you register.