Sasaki-san’s family have worked with the ocean for many generations. On March 11th he’d traveled to Sendai for a graduation ceremony for his son, arriving back in Kitakami in the early afternoon. Just after reaching home, the earth began to shake, more than ever before. All his life, his father and his father’s father had said, if the tsunami comes, take your boat and go to sea.

He rushed to the harbor, quickly loosening his boat. Nine others of dozens of fishers came for their boats as well. Together they started towards the open sea. They had to make it to a depth of 50 meters before the tsunami came, or they would die. Signaling each other by hand, they traveled together. They listened to their radios, hope for any news about what was happening how.

All was quiet and then their boats began to roll; the tidal wave passed underneath. Then ocean was unhappy. Rough, wild. The snow started to fall – so thick that they could no longer see each other. Cold, so cold. The radio spoke of unimaginable destruction. They could see fires. They turned on their lights so their families could see them. If their families were alive. 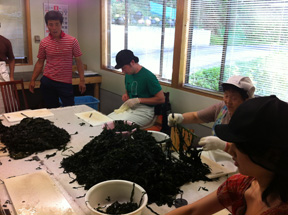 seaweed – harvested that morning and prepare it for market.  One grandmother, a huge welcoming smile, said she had been sitting at tables like this one for 40 years.  Later we had a had a feast from the sea – crab, shrimp, seaweeds, scallops. A bounty. We sat in a small fish factory, newly built since the tsunami. What was the story of this village, Jusanhama?  How had they stayed community?

One woman said it was the hope we could start again that held us together. Another man said we had the boats. We could still fish. And another said, we still had the sea. The first 100 days were very hard. A struggle each year to find food and water and clothes and warmth. A not knowing each day about what would come next. The young volunteers started to arrive and they had so much enthusiasm, she said. They had come to help us; we couldn’t give up hope.

We had lunch with six families and asked how they had managed to make their way forward. We had each other, they said. There were 40 families here before. Now there are fifteen. We found a place where temporary housing for our community could be built and we cleared the land. We went to government and said we have to stay together to rebuild our lives. We have prepared the ground, we said to government, please build our temporary housing here.

They stayed together. They’re family, Yes they sometimes fight. But they need each other and they need those who have come to help. This is work we must do together. There’s a story of generations here as well. This is intergenerational work. It was the voices of their ancestors that told them to take the boats to sea. Those boats gave them a place to start. It was the presence and wholeheartedness of the young volunteers that helped them keep going. It took all of this and more to rebuild the community.

Such lovely people. Kind, proud, laughing, somber. Some have died. Others have left. Those who remain are making a life together. There is always more to do. They need permanent homes.  They need more ways to sell their products.  They need a bigger community.  But they have begun!