I’ve written a lot about Future Centers  over the last year because I believe they may be an important way for people in Japan to invent a new future.

We’ve just begun FutureCenter week.  A little more than a year ago it was a major effort to plan five Future Center sessions in five days.  Now, well, have a look at the  2012 Calendar.  I’ve tried to make this link to a translated image file; it may expire.  If it does, you can go to www.futuresession.net; you’ll need to view this page with a translator — like translate.google.com — to have everything pop-up in English or some other language.  Nearly 60 events are listed and the week has grown into almost a month.

People all around Japan are experimenting with this way to gather people. 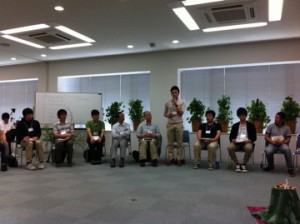 This past weekend, I hosted two sessions in Shikoku, the smallest of Japan’s four main islands.  Shikoku itself means “four countries;” high mountains divide this small island and in the distant past, people thought of themselves as living in separate lands.  It was a delightful two days as people dialoged with strangers about what was important in their lives.

One person offered a nuance I’d never thought about before: thinking about the future just means thinking about my happiness, I believe.  Another was very quiet as he said you know, I realize that I’ve never really thought much about the future before.  Later a third person remarked thinking about the future is really hard.  If we’re actually going to do something different, we need things like FutureCenters to help us meet and think together.  After all, I’m not likely to go up to a stranger on the street and ask her how she feels about the ways we’re taking care of our children after school, but I can do that here.

That’s a key part of what we’re doing — creating new spaces for new behaviors and actions.

Dialog is a core process for Future Centers.  Many other things are done as part of Future Center processes — building relationships, identifying needs, generating ideas, gathering data, converging on possibilities, forming new partnerships, prototyping new solutions — and we keep talking with each other about what we’re doing and what we’re learning.

I tell people here that while I hadn’t known the word Future Center until two years ago, I’ve been working with others to build Future Centers for almost 40 years.  They are the places we create to invite people to come together to envision and build a future we want.

Bob Stilger is the Founder and currently President of New Stories, a nonprofit that uses the power of story to help people regenerate community. After leading a local community development corporation in Spokane, Washington for 25 years, Bob’s work has stretched to many parts of the world including Japan, Zimbabwe, South Africa, Brazil, Australia. Co-President of The Berkana Institute from 2005-2009, Bob has a PhD in Learning and Change in Human Systems from the California Institute of Integral Studies. Since 2010 he has done extensive work in Japan, introducing collaborative spaces called “Future Sessions” as well as many participatory leadership processes. Eiji Press of Tokyo published "AfterNow: When We Cannot See the Future, Where Do We Begin" in June, 2015. New Stories published the English Edition in 2017. The current focus of Bob's work is helping communities transform after disaster strikes.