Getting to a new WE: Beyond the Categories– Bob Stilger’s Notes from Japan #45 ~ March 7th

I didn’t expect to be writing so soon again, but there’s a story that needs to be told.  Today I was at a forum organized by ETIC and the Learning Institute at Fuji Xerox.  The forum brought together a cross-section of 50 or so people from business and the nonprofit sector to talk with each other about social innovation.  I’ll make this short. 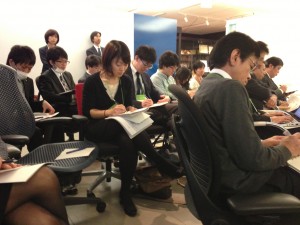 Here’s the sense that was in the room.  NPOs alone can’t make a difference.  Business alone can’t make a difference.  CSR (Corporate Social Responsibility) is a poor cousin.  Neither the young or the old can do it alone.  Both men and women are needed.  In many ways, nothing revolutionary — but so refreshing to hear from so many different people.  We need each other.

My friend Hide Inoue, the founder of Social Venture Partners Tokyo who is currently a fellow at Stanford came back for the session.  He led off.  He began with a short period of meditation — on the 15th floor of a high tech office building in the middle of Tokyo.  He talked about how it’s time for us to have an integration of me=work=society rather than a separation.  He talked about how we now need to learn to work with our logic, our creativity and our bodies.  Again, not revolutionary.  What was refreshing was watching people lean in and nod.

What is your business vision?  What is your mission? What is the collective impact you want to achieve?

Here’s part of the back story.  Three years ago in Japan I found myself working with business in Japan on change issues.  I was surprised.  I’ve done a lot of work with business in the US, but I’ve never thought of business as a ally in change.  But it felt like they were in Japan.  If you’ve read my earlier blogs, you’ve heard me talking about Fujitsu asking questions like “what can Fujitsu do for people with dementia?” or Honda asking “what can Honda do for people too old to drive?”  As I thought about my own responses here, I reflected further and went back a couple of thousand years or so to a time when Japan was a country of small villages isolated by precipitous mountains.  With rice grown in paddies as the main food, it took a village to feed itself business and community were the same thing.  This base still prevails.  In Japan business is still part of community rather than apart from community.

This isn’t about CSR, which often feels like an anemic after thought, almost an apology.  It’s about the question of how we’re going to meet the real needs and opportunities in communities — AS A CORE BUSINESS.  Of course any business doing this is going to try to make a profit.  And any NPO that’s going to be around for the long term better be looking at a making a profit as well.

It’s not about making an obscene profit — it’s about making a fair profit.  Part of what is more catawompus (my Japanese friends will have fun with that) is the US is the increasingly crazy, unsustainable and dangerous distribution of wealth — have a look at this YouTube Video I received today, a pretty amazing commentary on wealth in the US.

Now, just one more wave in today’s tale.  Throughout the afternoon different people were talking about BA o Tsukuru  (場うつくる) which means, literally, making the space that holds us – our relational field.  And they were talking about how businesses don’t have the capacity to create “BA”; they need people from the nonprofit sector.  Reminded me of last weekend’s conversation that I wrote about earlier today about men wanting women on their teams because it changes the relational field.

I just find this terribly exciting and energizing.  I hope you do as well.  Part of the context here, of course, is what is the business of rebuilding the disaster area in Tohoku?  How can business be true partners?  How can we create the BA that allows this kind of generative space to arise.  And that’s part of what we’re doing with the Tohoku Futures Network.

2 thoughts on “Getting to a new WE: Beyond the Categories– Bob Stilger’s Notes from Japan #45 ~ March 7th”