Earlier this week I was invited to have dinner with Peach Heart’s founders.  A year ago five young women created Peach Heart because they felt young women in Fukushima needed support in speaking their truths to each other.  There’s so much uncertainty for young women and so hard to share either grief or hopes.  Should I leave or stay?  Will make a marriage? Do I dare to have children?  What life do I want? 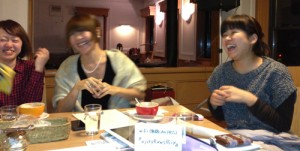 Funny how synchronicity works.  On the way to Fukushima from Kyoto I was having an e-mail exchange with a friend and colleague about some of the information he’s sharing to his e-list about Fukushima.  I’m somewhat skeptical of the value of sharing statistics from Fukushima.  I think they are misleading and just generate more fear.  I’m reminded of a something my dear friend Robert Theobald used to say:  when information doubles, knowledge halves and wisdom quarters.  There’s much, much more information from Fukushima than there is knowledge or wisdom.

One Peach Heart founder, Chika, is a television personality who now lives in Sapporo to the north.  Chika was raised in Fukushima, and will not live here now. She visits frequently. Chiemi was born and raised here and feels called to work to support the people who could not leave, even if they wanted to.  Maki was evacuated to the province to the south.  She found a way to move back because she wanted to organized a way for the voices of young women from Fukushima to be heard in Japan and the world. They are very close friends.

Chika just  recently returned from a visit to Chernobyl.  Even before her trip she had been urging the others to leave.  Her visit to Chernobyl was painful and shocking and she is even more convinced that they should leave.  They don’t plan on leaving,  They don’t want to hear her stories from  Chernobyl.  Their response is painful for Chika; it also leaves her unsure about what information she should share in what ways on television as well.

As with many aspects of life in Fukushma, it’s complicated!

Part of the complication, of course, is that knowledge and wisdom are needed more than information.  Information tends to be misleading.  How are Chernobyl and Fukushima similar and how are they not?  What important differences exist between Japanese and Ukraine cultures?  What more do we know now than was know 25 years when Chernobyl exploded?  Undoubtedly there are things for people in Fukushima to learn from Chernobyl, but what are they?

There have been some statistics floating around the Internet about incidence of thyroid problems in children in Fukushima.  I haven’t been able to tell where then samples were taken.  It makes a bigs difference.  Fukushima is a big province with high mountains.  Where you live in Fukushima makes a big difference.  There are three regions — costal, middle and mountains.  The coastal has the greatest amount of radiation.  Even there, as in other areas, there are hot spots and cold spots.  Which information is relevant, in what ways, when and where?

Chika, Miki and Chiemei keep talking.   Will Chika be accused of withholding information if she doesn’t tell everything she knows?  When is it better to remain silent?  Is telling the truth the same as telling everything you know?

We talked about how when one tries to convince another of the wrongness of the other’s position, the other often just digs in her or his heels and refuses to budge.  Is it sufficient just to speak our own truth — and our own hopes and fears and aspirations — each each other, without an intent to change the mind of the other?

The next day I was at Renshoan, a powerful place of beauty near Koriyama:  http://bit.ly/Renshoan.  We ended up being in this same conversation.  It took some interesting turns.  Junko, the guardian of Renshoan, suggested that we each choose to live in a story of fear or a story of possibility.  When we live in a story of fear, we attract that reality and the information that supports it.  When we live in a story of possibility, we attract that reality.  Of course, we are informed by information from around us, but are choices are rarely based on that information.  Our conversation reminded me of a quote from Einstein:  problems which exist at one level of consciousness aren’t resolved at a deeper level of consciousness so much as they become irrelevant.  Does the story of possibility come from a deeper level of consciousness?

I have a greater sense of personal danger when I am in Johannesburg than when I am in Fukushima.  AND I also know there are things I can do in both places which will put me in lesser or greater risk.  Which will cause more deaths — radiation in Fuksushma, HIV/AIDS, smoking, driving while intoxicated, breathing polluted air, riding a bike in urban traffic? How is the story of HIV/AIDS in Africa similar to the story of radiation in Fukushima?  Can people learn to live here in healthy and safe ways.

We continued to talk about these same themes later that day in Minamisoma.  Just before we arrived for an evening FutureCenter session, the biggest nearby quake since 3.11 struck.  Minamisoma is about 3 miles inland from the coast and 15 miles from the Fukushima reactors.  The quake’s epi-center was 150 miles off the coast and 7.3 in magnitudeqays off.  We arrived to muted conversation as well as laughter.  There were tsunami warnings. Had the earthquake damaged the Fukushima reactors?  Was more radiation coming their way? Would a tsunami come?  Suddenly, we were in the middle of the reality these wonderful folks live with each day.  There is no certainty. About 20 of us were there.  What should we do?  We wanted to stay together.  A decision was made, quickly, to begin a FutureSession.  If we received an alert, we can take immediate action.  But, since we’re here, let’s talk.

The magic of the circle worked for me.  My own anxiety had been rising.  As we sat and checked in with each other, I came back to being myself.  The alert passed.  There was no major tsunami this time.  We had a powerful evening, talking about how to live with uncertainty.

Now, just today, I’ve finished a day long FutureSession in Koriyama about how make it safe for children to play.  One person shared something which was particularly striking to me.  He talked about the changes over the last 30 years in terms of play for children.  Compared to the 70s and 80s, children just don’t play outside anymore.  They consume manufactured toys, sit alone in front of their TVs with GameBoys, go to structured activities that have most minutes of the day scheduled.  This person went on to say that this is catastrophic in its consequences.  We will lose more and more health, he suggested.  He went on to say that we have to reverse this pattern in Fukushima because it is even more important here that children play and exercise as they did 30 years ago.  Yes we have radiation.  That means, especially, that we need to find safe ways for our children to play outside.

All of this makes me come back to stories.  The story of fear and the story of possibility.

One thing I see is a lot of fear outside of Fukushima about Fukushima.  Sometimes it  almost seems to make people here scapegoats, or try to treat them as misguided and misinformed.  Let me tell you — there was nothing misguided or misinformed about the people I was with today.  I get pissed off when I view some of the video clips circulating.  One makes fun of a fictional character — a comic book hero — who is telling people to do their best.  How dare these outside critics make fun of a situation and a culture they don’t understand?  Do they know that loss of hope is more deadly than radiation?  Why do they think it is appropriate for them to pass judgments and suggest that people here must just be too stupid to understand the danger?

This is a complex situation.  It is always changing.  It is always uncertain.  Observations from outside the system are often valuable — but only when they are offered with respect, curiosity and generosity.  Judgments are not helpful.  Criticism is not helpful.  Information which is not yet knowledge is not useful.  Where else is this true.

I go home to the US in two days and soon I have at least one more blog to write — this one about the situation for people in temporary housing.  I’ve just spent five powerful days in Fukushima.  The people here are heroes for me.  I’m so honored to live and learn and work with them — and, I’m pretty tired.  On my way home to Kyoto for a final couple of days.