Today I’m traveling back from Ishinomaki to Tokyo and will return to the US on Friday.  We’ve just stopped in the City of Fukushima, which looks amazingly normal.  The destruction of radiation continues to lie heavy on my heart.

My first visit to Ishinomaki was 14 months ago, just three weeks after the tsunami.  So much is has changed.  Debris is cleared and piled up.  The piles are decreasing as it is shipped for burial to provinces throughout Japan.  So much is the same.  Because of the earthquake, the whole city sank or dropped (subsidence) a little over a meter as well as shifted a bit to the southeast.   theMost first floors of homes and shops in Ishinomaki, a city of around 175,000, are still damaged and unoccupied.  Many people are still homeless, living in temporary housing or with relatives.  Many are without jobs or livelihood.  All fish processing plants were destroyed and are being rebuilt again.  The government has decreed there will be no more residential housing near the sea where the fishing plants are.  The people are not happy with that decision.  I just discovered this blog — http://www.dannychoo.com/post/en/26208/Ishinomaki+Tsunami.html — which gives some sense of the immediate before and after.

I came to Ishinomaki on this trip with ETIC (Entrepreneurial Training for Innovative Communities).  I’ve mentioned ETIC in 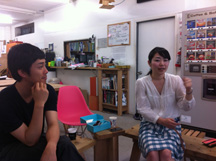 other blogs.  Shortly after 3.11.11, ETIC began to conceive of a Tohoku Fellows program where people in their 20s and 30s would make a 6 month to 2 year commitment to working in the region.  ETIC has continued to learn its way forward with the program and now sees the Fellows work as that of community organizers, bringing their listening first and their expertise second, as they work with people in the region to build a future together.

My work in Ishinomaki was to gather some Fellows together for an afternoon reflection session to learn from each other about their work.  I share some of what I’ve learned by working with community based organizations around the world who are working to build healthy and resilient communities.

There were common themes as we checked in.  Several spoke of how they felt lost and unclear about their lives and their purpose before 3.11.  By working with these rural people, they have each been discovering who they are.  They talked about how they have found their own personal identify and the courage to just stand up.  Yes, it has been hard work.  No, it is not always easy.  But they’ve come to respect the values and knowledge of local people in ways they would have dreamed impossible a year and a half ago.

They’ve come from villages where they and their ancestors have lived in the same community for hundreds of years.  Their lives have been based on community.  Now they are cut-off and alone.  AND, they aren’t very interesting in making a temporary community with these strangers.  So they live side-by-side, alone.

My new friend, Narita-san, has a different idea.  He says, let’s make community by playing together. He thinks that it won’t work to bring people together to dialog with each other — at least not yet.  Let’s play together first.  Let’s have some laughs and shake loose our reluctance to be with others.  So that’s what he’s doing now.  Working to create festivals and play activities where people get to know each other.  It reminded me of the story of a friend of mine who was a teacher on one of the townships outside of Johannesburg during the time that apartheid was ending.  Two black factions were had been locked in fierce battle with each other for many months.  Each controlling nearly half of the township with a killing ground between.  My teacher friend found some way to get them to have a soccer match.  It was the breakthrough that led to an end of the killing.

People are working in Tohoku in all sorts of interesting ways.  They’ve found that their first job is to become really good listeners.

One of the things I suggested to them is that in the coming months we need to connect them and their work with each other in more powerful ways.  Right now their work can lead to change in individual communities.  When connected, it might lead to transformation — which is what is needed.