Incredible, overwhelming, stupendous. Those are a few of the words that come to mind.  Yesterday, on one of the coldest days in Tokyo this year 120 people showed up for a day long workshop on creating a network of social issue future centers.  We scheduled the workshop in early December and thought that perhaps 30 or so people would come.  Towards the end of the month, my dear friend and colleague Nomura-san from Fuji/Xerox’s KDI realizedt he would dedicate himself to launching a new Nonprofit Organization this year which would grow a network of social issue future centers. Miratsuku, the NPO founded last year by our dialog colleague Yuya Nishimura (http://emerging-future.org/), will incubate this network. 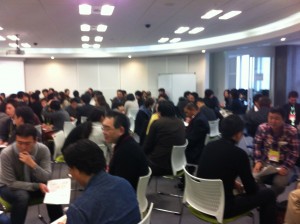 they were already doing which could easily be called Future Center work. When we planned this workshop we were using last year’s language of a network of 500 Future Centers.  But I saw immediately that was too few.  The energy in the room was for at least 1000!

I talked about the reasons we can plan on finding, creating and connecting 1000 Future Centers in Japan when then are only ten or so in Europe.  In Europe, a Future Center is a building.  In Japan a Future Center is a BA — a hospitable space which hosts the energy, dreams and possibilities or a group of people who come together to get something done.  And the energy in Japan is astounding right now.   3.11 has been the cause of great destruction, devastation and grief AND it has also sparked a sense of release from a future we did not want.  What’s happening — all over the place — is that people are stepping forward to take responsibility for their own lives.  It’s what we saw in the four presentations — one on TEDxTokyo which was one of the first TEDx programs in the world and which continues to morph into a more and more activities, one on Hana Lab which works to empower college aged women, one of a major insurance company that has embraced Future Centers as a way to get their work done, and one on an extensive community involvement program in Kyoto.  In each case what they’re doing is releasing energy and co-inspiring each other.

When I first arrived in Japan in 1970, one of the first phrases I encountered for describing Japan was “the nail that sticks up gets pounded down.”  This was one aspect of collective culture — people did not individuate.  They did not stand up for what they wanted.  Well, what’s happening now is that the same collective culture is becoming a force to help all nails stand up!  And this is a powerful shift.

So this work is already happening.  Why are Future Centers needed?

At The Berkana Institute we’ve talked for years about the power of a four stage process:  Name, Connect, Nourish and Illuminate.  Naming gives power.  It makes something going on visible.  Connecting begins to build a system of action which serves to increase the power:  we inspire each other.  Nourishing people doing Future Center work with explicit principles, practices, methodologies and resource materials make it possible to do even better work.  Illuminating the work already being done tells powerful stories which inspire and inform others.  We believe that by consciously creating a wide network of Future Centers it will be possible for more and more people to step into creating Japan’s future.

And the time is now.  There’s a readiness.  An eagerness to get to work.  In April of last year when I arrived three weeks after the disasters, the main emotional tone was grief and trauma; something else was stirring, a sense of the future being now — but grief was what was most present.  In August the mood was one of “it’s time to do something, but we don’t know what to do.”  By the end of the year there was another shift — a quiet determination that was beginning to quicken.

And now it is time.  If we had held yesterday’s workshop in early December, we probably would have had 30 or so people.  They would have been getting ready — but I doubt the spirit and determination we saw yesterday would have been present.  Professors, students, business people, NPO leaders, government officials, men and women. Youngest around 20 and oldest around 70.

The second half of the workshop was people talking about what they would contribute to build this network of 1000 social issue future centers.  We announced Future Center week for 2012 for the end of May.  Last year we made an all out effort to have 5 future center sessions in one week.  This year we want to have 100!

We’re getting traction.  This work is going to have to be nurtured and supported.  We’re going to learn our way into it.

The Future is Now.