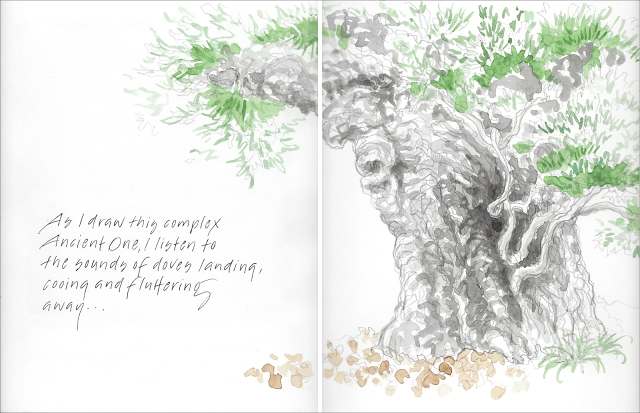 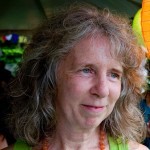 I traveled to the Middle East in January to be part of a Nonviolent Communication intensive in the West Bank with 40 Israelis, 40 Palestinians and 15 internationals.

We lived together for nine days, listening and speaking deeply, while the Inauguration and the Women’s March and the wild first weeks in the White House unfolded on the other side of the world.

The power of this gathering for me was being in the room together.

There is so much separation encouraged and upheld in this Israeli Palestinian dilemma.

Being with the other and feeling ourselves – taking in the other side of the story – all of us holding the pain – inner and outer – sensing the same deep need on both sides to be respected and safe and feel they belong on this land.

Perhaps it is strengthening the inner sense of home – belonging to ourselves – that is the place to begin.

In the end I realized that I couldn’t ask Israelis and Palestinians to reach out across the divide and trust the other if I couldn’t do this in my own life – a humbling insight.

I also was inspired by the deep capacity of this group to bridge and connect in spite of it all.

I stayed in Jerusalem for a week after the NVC gathering.

It is a city of complex faiths, intermingling worlds and intensely separate perspectives.

Somehow, beneath it all, I felt its deeper name – City of Peace.

In Arabic it is Al-Quds – The Holy Home.

I opened the sketchbook in the midst of the intensity and practiced being with uncertainty on the page.

On the eastern edge of the Old City I visit the Temple Mount, one of the holiest, most contested religious sites in the world, sacred to Judaism, Islam and Christianity.

I draw the towering walls and arches of the Second Temple with the dome of Al-Aqsa mosque high above.

As I sketch I listen to drums, guitars and voices singing Hebrew songs nearby. 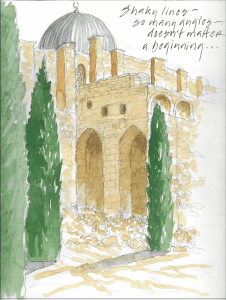 I wander down the Southern Wall and find another corner to study. 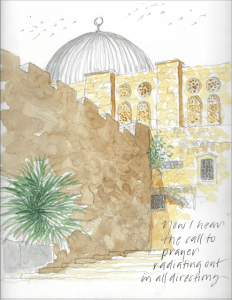 Farther along the Southern Wall are Huldah’s Gates.

Huldah was a Hebrew prophetess, seer and healer living during the reign of Josiah.

She is remembered as upright, righteous and wise. Now her portals are blocked, bricked over.

My friend Roberta Wall and I stand with the gates at our back and speak about wholeness, healing the feminine, feeling the spirit of Huldah warming our backs, allowing truth and bravery to still come through us and speak. 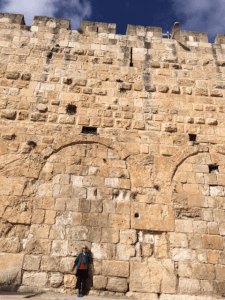 I spend a day at the Israel Museum drawing ancient objects slowly, precisely, listening to voices wandering by speaking Arabic, Hebrew and English.

Then there are moments of quiet, and it’s just me in conversation with the thing itself. 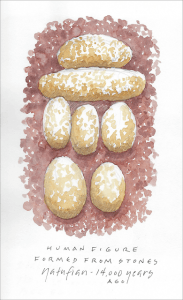 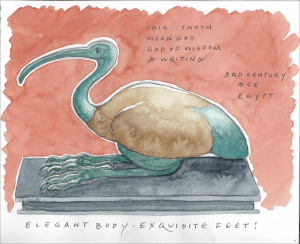 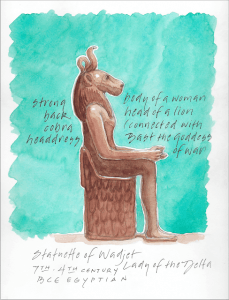 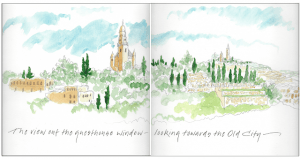 Far in the distance is the Mount of Olives and the Palestinian village of Silwan.

At the end of the week we visit the Garden of Gethsemane full of 2000 year old olive trees, darkly creviced, craggy, sprouting and fruiting since the time of Jesus. 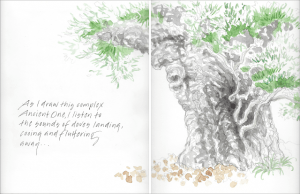 I listen to my friends tell stories of bombings and body parts  and speak about the life of the Soul, the wisdom of the Torah, the sacredness of the Koran.

in the Garden of Peace.

Barbara Bash is part of the NewStories Social Field and an accomplished sumie ink brush artist who has been connected with NewStories for many years.