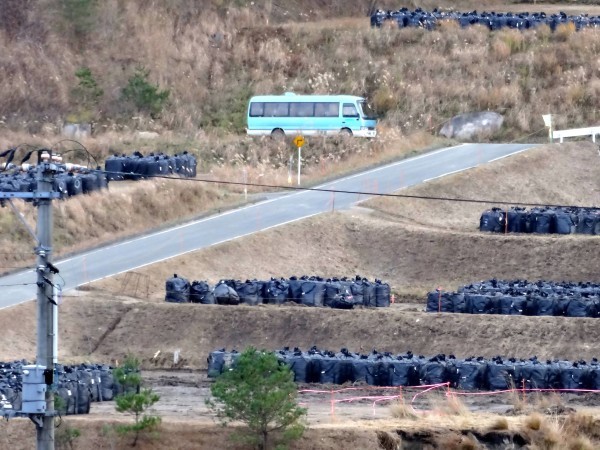 I sit here at my keyboard feeling both broken-hearted and still angry tonight.

Hide Enomoto and I have been co-hosting a learning journey to Fukushima with 24 people, all Japanese except for one American (well two, including me). We visited Itatemura, a small village that began 2011 with a population of about 6,000 people. It had a growing reputation all over Japan for its clean water, delicious air and wonderful food. It was also just over a small mountain range from the Fukushima Reactors.

On March 11th, 2011 when the earthquake struck an the tsunami washed in, Itatemura had no damage. It was about 30 miles inland.  But when the reactors exploded on March 12th one of the unexpected things that happened was that Itatemura received one of the largest dumps of radiation in the region. A perfect storm…

Things were so crazy then that it took almost a week to realize what had happened.  And then the entire village was evacuated. This beautiful village became a ghost town.

I’ve been there many times over last 4 years. Watching the changes. I was unprepared for what I saw this week.

Some of you may remember the infamous headline during the Vietnam War: “We destroyed the village to save it.” That’s what’s happening it Itatemura. Policies set it Tokyo — way over the heads of people in Itatemura — are to decontaminate the village. That means removing all the radiated earth — the top 6 inches — which, of course, is the top soil carefully built up over hundreds of years. Also washing trees and brush by hand, and then removing the soil newly contaminated by washing. The waste is placed in black storage bags (which will fall apart in 5 years) and placed in big piles in temporary-temporary-temporary locations for resettling in temporary-temporary locations before being moved to temporary locations before arriving at the non-existent destination of permanent storage.

The waste is being removed at huge industrial scale and the field and hillsides of the village are being completely ravaged. It is not being done in a way the people who have lived in and loved the village would proceed. The “cleanup” proceeds at the direction of Tokyo. Profits are being made, by companies in Tokyo. It is the second disaster — and it feels more tragic and greater in magnitude than the first! It is a travesty.

Some say it is necessary — but, really? By anyone’s account, the village will remain uninhabitable for 30-40 years. What else was possible? What would have become visible if absolutely nothing was done for 2-3 years except local people really listening to each other and listening to the land?

But the “clean-up” is being done with the same mentality that created the nuclear power plants and the ensuing disaster. Human’s dominate and control. The earth is our dominion. We will do whatever we damn well please and we will fix any problem we stir up. Progress is necessary — get out of our way.  We need power to get rich and consume more of the earth’s resources.

I could not bring myself to take any pictures; it was just too horrifying. But I reached out to a friend for one of hers. Each black bag  — about 4 feet high and 3 feet in diameter holds radiated soil or other waste. 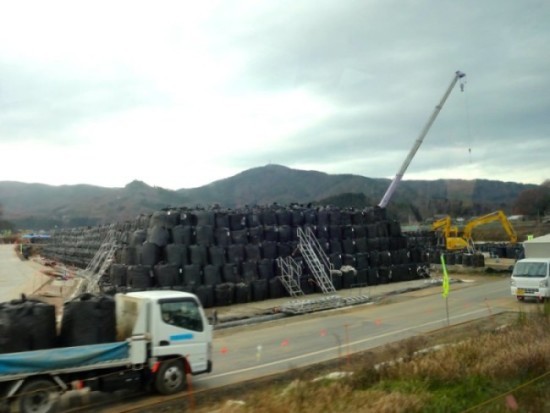 This beautiful village is being turned into a terra-farmed mega waste site with no regard for anything except to clean it up as soon as possible and then forget about it. Of course, clean-up is a relative term. So, for example, Tokyo firms have contracts to clear forests within a particular boundary. On the other side of the boundary, no action is taken. Guess what happens when it rains? Or with the winds blow?  Immediately the certified decontaminated lands are re-contaminated. But the contract is done and the certificate issued, so it is left as is.

It is a heartbreaking mess. And it is an exquisite example of the exercise of power over rather than power with. The central government listened patiently to local people for a while — and then the government was willing to make those “hard decisions” that local people can’t make for themselves. What’s missing in this picture?

Earlier in the day we visited what used to be one of the largest temporary housing sites which once held more than 1000 people. Only 180 remain — the oldest and poorest people, scattered in another ghost town.  They remain because construction of permanent housing is still three years away.  Why, you might ask, in a country that provided temporary housing for more than 300,000 survivors within 5 months of the disasters, still unable to build permanent housing almost 5 years later?

Simple answer is OLYMPICS.  The construction for the 2020 Olympics has driven the cost of construction materials up by 200-300% — it always happens, everywhere in the world. with events like the Olympic and World Cup. And even if materials were affordable, there are no contractors to do the work. Last week, for example,  I was in a perfectly useable building near Tokyo Station. It’s being torn down because it is not pretty enough for the Olympics.  The central government places a priority on making things pretty for the Olympics rather than building permanent housing. More power over rather than power with.

It is insane and regrettable. What can we learn from these new disasters?

With compassion, combined with confusion and anger…