I’m on my way home to Kyoto for a brief visit before returning for a for five final days of work in Fukushima.  Deep learning continues for me and for all of us as we discover how to support communities in Tohoku in creating a new future.

We’ve found the person who will be the regional director for this work.  He’s a perfect choice.  I’ve known Iwai-san for almost three years.  When I met him he was a senior executive of a medium sized firm in Tokyo who was one of the first in Japan to embrace Future Centers as a way to bring innovation into business.  After the triple disasters he was pulled by his heart to Ishinomaki where he joined hundreds of others in shoveling out the rubble, serving soup and listening to people’s stories.  He kept going there and eventually decided to leave his job and devote himself to the restoration of the region.  What a wonderful partner!

I’ve been quoting an old African proverb recently:  if you want to go fast, go alone.  If you want to go far, go together. We’re going together in Tohoku.  Much of my time in October and November has been spent listening to people.  Sometimes in one-to-one, sometimes in small groups, sometimes in FutureSessions I have hosted in different parts of the region.  Listening people into relationship with each other.  Looking for the patterns.  Sensing the story under the story.  This is not logical, linear work.  It does not fit on a spreadsheet.  It doesn’t, in these formative stages, lend itself to project planning.  It is listening.  Here are some of the parts.

1.  Partners.  I’m finding partners, connecting them with each other, and the Tohoku Future Center network.  We see four partner roles:

First stage of the work is finding these people and connecting them.  Listening and sensing.  Not doing a dramatic launch.  Working with the energy present.

2.  Places.  Intimately connected to the partners are places.  Our work is first and foremost local.  We know that nothing happens unless it happens in a place.  Nothing lasts unless the people in that place co-create and own what happens.  Where are the places where people are ready to come together to create a new future?  What are the themes which engage them?  With our partners, we are identifying these places.  There are many.  We’re beginning in about nine: 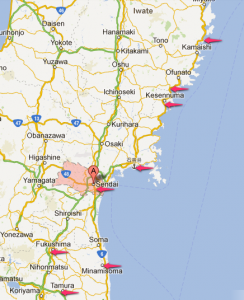 3.  Just Do It.  We’re starting.  Building the airplane while flying it.  Looking for places with people who  want to hold FutureSessions for almost any purpose.  I remember a conversation ten or so years ago with Wink Franklin, then President of Institute of Noetic Sciences who had led IONS to its home on a mountain south of Petaluma.  Wink talked about how they were letting almost anyone who the facilities who wanted to.  He paused and said that the only users they had turned down was a nudist colony.  That image has stuck with me. When beginning, cast your net wide – you can narrow it down later. So those of us who can are hosting FutureSessions wherever we can.

4.  Create Infrastructure.  We’re building our own website, finding “co-located” space for Future Sessions in different communities, and finding partners whose virtual infrastructures will support our work.  One new company — FutureSessions, Inc. — is developing an ourfutures.net website which will support people in designing FutureSessions, inviting and registering people, sharing designs with each other, and reporting results.  Another virtual publishing company is creating a virtual Tohoku journal in Japanese and English.  Another virtual publisher is committed to sharing stories from the region.

5.  Establish and Train a Community of Practice.  I still dislike the word training, but I don’t yet have a better one.  There are things people need to learn if they are to support communities in creating innovation and they don’t have to learn it all from the ground up.  We’re working with others in Japan to develop a curriculum for what we are calling “Innovation Facilitators.”  They are the folks who will design and host future sessions and who will support “themeholders” as they work to create innovative action.  We will connect them in the partners networks described above and we will create a monthly rhythm of gathering for learning.  The foundation of the community will be sharing their learning from their own context and design and hosting of spaces for innovation.  The pillars of the community will include systems being and thinking, expanding consciousness and world view, design thinking, transformative scenario planning. project management, forming locally grounded partnerships with outsiders, bringing knowledge in from the outside on with local control, Theory “U” and methodologies to sense, shape, act, learn, reflect and measure.  The larger plan is to invite and support learning groups in three parts of Japan and to connect them.  The Tohoku plan is to have the monthly sessions hosted in different communities and to do work in the hosting community after the training.

When I wrote about creating a Future Center Network a year ago, I saw glimmers of this possibility.  I held the intention.  We’ve continued to make this path by walking on it.  Holding the intention while looking for the ways in which it might unfold.  A year ago I had a few relationships with people in Tohoku, now I have hundreds.  This work comes alive in a different way through their faces and voices and stories.

We have far to go, but I know we have begun.

At many levels, none of this is complex.  It’s just doing the work.  Finding the partners.  Building the connections.  Holding true to principles and beliefs.  Continually sensing for patterns and connections.  Operating with clear intention.  Being open to surprise after surprise after surprise.  Trusting in original blessings and human kindness.  Practicing generosity, curiosity and respect.  We’re also following the learning developed over the last decade at The Berkana Institute where we learned that if we paid attention to naming, connecting, nourishing and illuminating, we created the conditions for self-organizing systems to emerge.