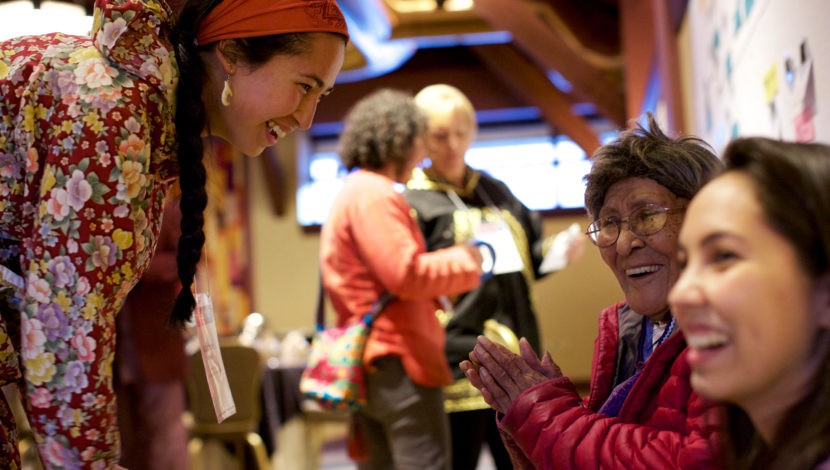 One Story: A Report of The First Peoples’ Convening on Climate-Forced Displacement

In October 2018, over sixty representatives of 28 First and Indigenous communities met in Girdwood, Alaska, for a first-of-its-kind gathering: the First Peoples’ Convening on Climate-Forced Displacement . NewStories was asked to design and facilitate this amazing and heartfelt gathering. The Unitarian Universalist Service Committee, the Climate Justice Resilience Fund (CJRF), the Alaska Institute for Justice and other partners, collaborated to make the First Peoples Convening a reality. UUSC played a leading role in the convening, including strategically identifying communities who face the threat of climate-forced displacement to attend and participate in this convening, developing a participatory design process, identified experienced facilitators, meeting frequently with a Core Planning Team, providing monthly informational briefs for participants, and covering the costs for the venue, travel for participants, facilitation, meals, and on-site support.

UUSC proudly shares One Story: A Report of the First Peoples Convening on Climate-Forced Displacement, which centers the ways the crisis of rapid climate change impacts our partners, calls for immediate action to curb this devastation, and demands solutions that advance the human rights and leadership of First and Indigenous Peoples. Zulma Patarroya, a member of the NewStories Team, was the graphic recorder and part of the facilitation team for the convening and was responsible for the design, layout and graphics for the report.

“We are a spiritual people with ancestral knowledge. We are the stewards of the land. We have inherent rights. We are inclusive and empowered and we are the first peoples of the world.” — John Pingayaq, Chevak, Alaska

The First and Indigenous Peoples who gathered in Alaska face devastating threats to their cultures, lands, human and environmental health, human rights, spirituality, well-being, traditional systems and livelihoods, food systems and food security, local infrastructure, economic viability, and their very survival. This climate crisis has been brought on by unsustainable development, continued fossil fuel extraction, and uncurbed carbon dioxide emissions. First and Indigenous Peoples, like those represented at the convening, have contributed the least to this crisis, yet bear the worst of its burdens. While the international community has made some significant strides in developing compacts and guidelines related to climate-forced displacement, it has tragically failed to do what is most needed: curb greenhouse gas emissions and stop global warming. The climate crisis is not a future or theoretical threat—urgent action is needed now.

While participants in the First Peoples’ Convening came from different parts of the globe and represent dozens of First and Indigenous Peoples, many expressed the importance of the traditional knowledge held by Indigenous Elders. Relearning and embracing Indigenous knowledge and ways of life is critical for Indigenous Peoples’ resilience and cultural survival in the face of rapid climate change. But society at large, too, is in desperate need of sustainable and respectful ways of living with the earth. As the declaration drafted by the participants reads, “We are a spiritual people empowered by values and beliefs that are urgently needed today to elevate humanity to an inclusive and peaceful truth that is based on an Indigenous knowledge system of the land, sea, and sky and on observations gained from the western knowledge system.” International governing bodies, funders, and government agencies urgently need to prioritize Indigenous communities’ climate solutions and bring First and Indigenous Peoples to the table to help bring about a paradigm shift to curb today’s climate crisis.

Uphold the Right to Self-Determination

Participants shared the challenges and stumbling blocks they have faced during decades of work on climate change mitigation, adaptation, and, for some, community resettlement projects needed to ensure their communities’ survival. These communities, who face layers of threats to their right to self-determination, are often not consulted, or are ignored, by government agencies considering climate adaptation measures that will impact them. The lack of enforcement of the international and domestic legal frameworks that protect their rights is paired with a dearth of funding to implement their solutions. Government actors across the globe must respect and protect Indigenous communities’ right to self-determination, particularly in relation to the perilous effects of climate change.

“We are the start of this. We are the first people that are experiencing all this. It will hit other people some day; they will have to ask us how we adapted. We are going to be the ones that know, because we are the ones who had to go through it first.” — Angela Johnson, Nelson Lagoon, Alaska

Join UUSC in pledging to take action to combat climate change with our Climate Pledge.

Download the PDF of One Story: A Report of The First Peoples’ Convening on Climate-Forced Displacement.

Download a PDF of the First Peoples’ and Indigenous Peoples’ Declaration.

This blog is courtesy of the Unitarian Universalist Service Committee

PrevPreviousWho Is The Real Hero?
NextAn Interview About Building CommunityNext