It takes about 7 hours to get to Otsuchi in Iwate Province to the north of Toky-. Four hours by high speed train, two hours by low-speed train, and about an hour by car. We went there yesterday for a FutureSession. Otsuchi is a costal town that had a population of about 17,000 before 3.11.11. In a matter of minutes a little over two years ago, about 10% of the population died and another 10% had their homes destroyed. Among the dead were the Mayor and 20 other government leaders. It’s been a demanding two years.

Our FutureSession was in a community building in the hills above Otsuchi. Standing there, looking out to the sea level ground below, it was easy for my mind to imagine the 200 or so people who probably sheltered in the large room we were using. It would have been their home for at least five month while temporary housing was being build. It’s almost unimaginable.

My friends and colleagues from FutureSessions, Inc. have done a series of four Future Sessions. The first was at the end of 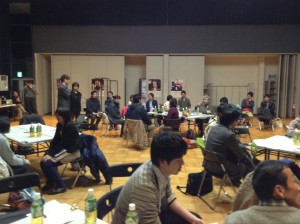 November. This was the last. I missed the two in the middle, but got to the bookends.

It was delightful!. Six different teams presented what they are working on to rebuild the community, working with what the community has. In the US we call it (ABCD) Asset Based Community Development, in Japan one of the names it goes by is Jimotogaku – which means, literally, the learning from our town. These ideas evolved through three earlier FutureSessions, plus a lot of work in-between. The purpose of last night was to share with the community and ask for support.

1.  Otsuchi Filled With Flowers And Dreams. So much beauty was lost with the disasters. This group believes they can recreate community by engaging the community in replanting flowers throughout the town. They want the people who died to be able to see all the flowers from heaven. They’ll build community by planting and caring for flowers together and they will develop their own skills to be able to create a school for flower raising.

2.    Make Rafts And Then Have A Raft Race. The basic principle is helping people have fun together so that they will want to talk with each other.They have to communicate with each other to build and sail the rafts.  The spirit of friendly competition will enhance the communication. In many ways inviting people into this festival is a way to create a context in which they can be invited to think about a new future together. 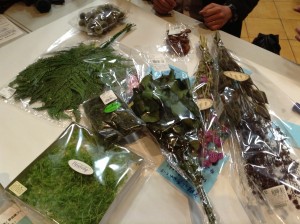 3.    Making Preserved and Dried Flowers As A Small Business. There’s a large market in Tokyo for high-end, dried and preserved flowers – now mostly imported from Europe, like the ones pictured to the right. The idea is to help farmers learn how to grow flowers and to support middle-aged and older women engage in an enjoyable activity of preserving and drying flowers. The team reminds everyone that Otsuchi is a lovely natural environment where lowers can be grown in every season.

4. Grow Wasabi, and Use Our Pure Water In Other Ways!  This is a new idea that started just a month ago. The mountains around Otsuchi are filled with underground streams with pure, refreshing water. These streams are a key part of the long history of Otsuchi. Years ago, wasabi was grown here – it takes a lot of water. Also, historically, the water was so pure that it was used to raise a rare variety of fish and also used for making tofu. Travelers came from far away to take baths in the water. Several different small industries are possible from using this natural resource.

5.  Making A Park Where Our Children Can Play Again.  A high school freshman girl leads this project team. She called people together by reminding them that children are not going out to play after disaster. The team believes that people can make parks — it doesn’t have to be hard or complicated.  We can get together and do this ourselves. — flower garden, benches, tables.  They’ll get support from corporations who will be acknowledged in the park and they’ll find some land and just start – discovering with children who come what it is that they want to have in the park.

6.  Light Up The Town With Torches.  High school and university students working together on this one. The town is now so 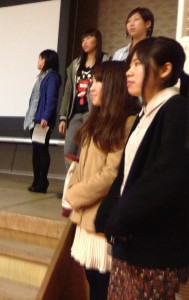 dark because almost all street lights were destroyed in the tsunami.  The team interviewed many people for their ideas about the darkness.  They actually walked at night and videotaped to show how dark it is.  Cars cannot see people walking on the road, and that’s very dangerous.  They’ve done an analysis of where people walk at night and where street lights are needed.  Their first step will be to place torches along the corridors most in need of streetlights to make the need for lighting more visible to the whole community.

These are not complicated ideas. They are a set of first steps to bring the community back into relationship again. The tsunami was devastating here. More than 600 of the 650 fishing boats were destroyed. Many survivors are leaving town because they’re both in grief and because they don’t think they can make it here.

This group is different. They’ve found a place to start. Perhaps their initial ideas won’t work out. That’s always the case. But we act and learn, act and learn. Build relationships and build community. Find first steps.

Most of the groups that need financial resources to move ahead mentioned www.readyfor.jp  (view in translate.google) – one of the promising new cloud funding resources in Japan. They’re not waiting for anyone’s permission – they’re moving ahead.