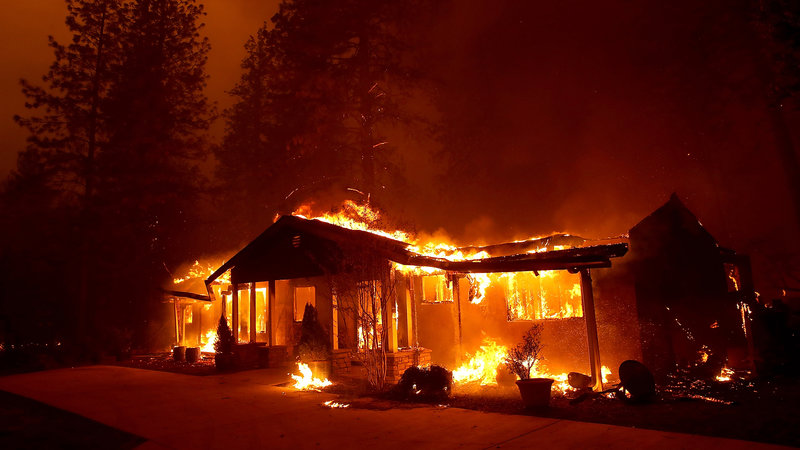 I woke up in Japan the morning after the October, 2017 fires in Sonoma and Napa. We’d just finished hosting a fourth annual learning journey into Fukushima and I looked at messages and saw many friends marking themselves as “okay” which said, of course, that something was not. My book AfterNow: When We Cannot see the Future, Where Do We Begin? had just been published in English a month earlier. Lying in my futon in Japan, I felt an immediate call to Northern California — a place home to many friends, a place where I have spent many weeks and months, one of the places I think of as home. A month later I was in Sonoma and Napa, called in by the organizers of Thrive Napa Valley, a project hosted at NewStories. This story begins there.

I’m just back from part of a week in Butte County where the Camp Fire of November 8, 2018 destroyed the town of Paradise — population 27,000 — and changed the lives of many others in the region. My first visit to Paradise was in early March. Julian Cohen of the Living Guild invited me to join him in a day long workshop to give Paradisians an opportunity to connect, share stories, grieve the past and dream of what might be. As we drove from Sonoma to Paradise, Julian asked “we all know about the role first responders play, but where are the regenerative responders?”

That question launched me on a three month learning journey and it was punctuated by last week’s visit to Paradise. I’ll say more about that moment in a minute, but first some context.

After more than eight years of working with people in post-disaster communities who are defining a new future, here’s what I see. Disaster, itself, causes great devastation. AND, for many, it is a wakeup call and a sense of we have been released from a future we did not want. That sense is soon caught up in a rush to return to the old normal. Personal, social, economic and political forces welcome the old and familiar. How can that sense of new possibilities be kept alive?

After our March visit, NewStories, folks from the Living Guild and from Regenesis Group kept talking with each other and with community leaders from Paradise. Our sense was that Regenerative Practices and Frameworks might be key to keeping those new possibilities alive after disasters and that Paradise might be a place to pilot that idea. Intense conversations and much writing, week after week. For me, part of that time was to begin to understand regenerative frameworks. A concept paper I received a couple of weeks ago from my friend Joe Brewer — Pedagogy of Bioregional Regeneration — was a critical piece. In the ways I work with community, finding the starting point is one of the most essential things. Joe’s paper combined with last week’s visit to Paradise has revealed starting points!

There’s simply not going to be a from-the-outside-in regenerative response in Paradise. One of the things that was very clear at the town council meeting I attended for almost 5 hours last week is that Paradisians are fiercely independent, with freedom a core value. The town has already gone through what might be defined as a comprehensive plan update, funded by Sierra Nevada Brewing and carried out by Urban Design Associates of Philadelphia. Good, conventional work, which has helped highlight values and shown one path forward. It paints a picture of a smaller Paradise, pretty much like the one destroyed. People aren’t going to be coming together for a whole new set of large-scale community meetings and it is far from clear when that approach actually creates change. Perhaps change comes from the parts, woven into the whole….

Part of what happens after disaster is that everyone who can shows up to help those hardest hit recover. Some see opportunities for creating something new. Everyone’s so darn busy that silos start to develop — people doing the best they can with what most inspires them. The recovery work continues and the unintended silos grow. Sometimes folks get pissed off at each other — within and between the silos. Everyone is running as fast as they can and everyone gets exhausted. The exhaustion, itself, almost becomes a badge of honor. Months pass, a new point of stabilization is reached. Work in the silos continues. Eventually the funds available after disaster begin to dry up and competition for remaining funds tends to separate the silos even more.

Let’s change that scenario in Paradise! How might the unintentional silos become the imaginal cells of transformation? You know that story, right? When a caterpillar begins its journey to butterfly, it dissolves in to ooze and the imaginal cells begin to emerge, bringing with them the pattern of butterfly. How could NewStories Spiral of Co-Creating be a reference point within these emergent efforts and as a means to connect them and make them more visible across the Ridge that Paradise calls home? How might regenerative practices and frameworks inspire questions and action as a connected community finds its way forward into a future it cannot yet see? Might this be the starting point for community becoming regenerative responders to disaster?

What could explicitly weave together and support the work of many groups in ways which help them move forward with the vision they see while connecting them with the larger community. Groups like Rebuilding Paradise, Paradise Community Guilds, Norton Buffalo Hall, the Camp Fire Long Term Recovery Group, Lotus Guide, Paradise Alliance Church, Ecosystem Restoration Weekend Camps (just those few I’ve listened in with so far) might be connected with each other and the community in new ways. What might become possible that wasn’t possible before through these connections and through growing community skill to connect, convene conversations that really matter, curate and make visible the promising pockets of innovation, and co-create new possibilities?

My friend Allen Meyers invited David Zink, another Paradisan, and I to visit the site of the home that raised him. The green orchard of fruit trees survived the fires, the pines and brush — and the home — did not. Allen described the crews removing the remains as undertakers. David suggested they were midwives as well. Death and rebirth. Death and rebirth. Please watch this moving video Allen made on this land several days later, on Father’s Day — Undertakers and Midwives

And please explore NewStories’ key work: Preparing for the PossibleDownload