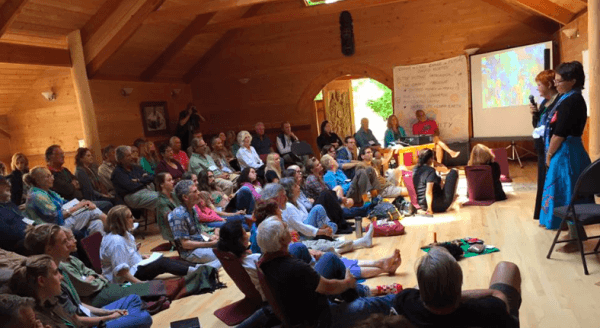 Rays of Hope: Reflections on the 2015 Hollyhock Summer Gathering 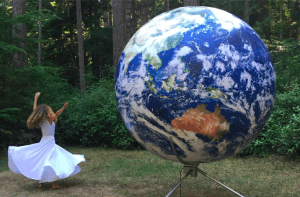 Deepening Community: Finding Joy Together in Chaotic Times was this year’s Summer Gathering theme, taken from the title of Paul Born’s new book on community. The Summer Gathering is a 29-year old experiment in deepening community hosted by NewStories team members Rick Ingrasci and Peggy Taylor. Part exploration of ideas and strategies and part summer holiday, it brings together a vibrant, diverse group of movers and shakers, social entrepreneurs, educators, healers, artists, and thinkers to explore social transformation and human consciousness.

Held at Hollyhock Retreat Centre in British Columbia on the grounds of a traditional First Nations summer gathering place, the Summer Gathering serves to rejuvenate, refill, and cross-pollinate pioneers of change hungry for each other’s perspectives on the news of the world. What do we see happening? What are we doing about it? What do we need?

Everyone who comes is doing something, usually spectacular, for all their funky dressed-down outer look. Every morning plenary is like watching Clark Kent in a phone booth: a mild mannered fellow camper turns into superman or superwoman over and over again. Most are casual and without self aggrandizing/ego in the group, so it’s a surprise when the bushel basket is thrown off and the hidden brilliant light—full of skill, wisdom, dedication and strategy—shines forth into the room and into the future.

In the afternoon we mix it up. Following a modified Open Space structure, everyone has a chance to offer a conversation, a skill, a practice, a dialogue, or a presentation on any topic from a beachside ukulele jam to “how do we handle our grief and maintain some modicum of joy through the onslaught of doomsday predictions?”

The latter was my question. I had just come from a meeting of Evolutionary Leaders where we looked ahead to the the next few years and the likely deep suffering of our human kin in terms of displacement, death, and disaster. No one was doubting that life will continue, but will humans?

I went into the gathering with the direst of predictions weighing me down: the “big one” in the Pacific Northwest, millions dead from earthquakes, tsunamis, Ebola-type epidemics, droughts, floods, famines, war. Even if we survive as a species, it doesn’t appear that we’re actually going to be able to make the necessary changes without the collapse of so much that we now hold dear. It seems quite possible that, among other things, a lot of humans are going to die.  And I have such an attachment to humans. So much energy and experimentation and growth has gone into the human experiment, it seems outrageous to just chuck the species and start over. But must we go through waking up as a species by creating such mass destruction?

I have such difficulty redeeming destruction. I can deal with individual death; I get the pattern within our lifetimes of birth, death and rebirth, but I am so resistant to humanity dying as whole. I don’t think Earth will die as is posited in Interstellar, though it could be uninhabitable in many parts for humans for any number of reasons. But you don’t have to face death of humanity if you can imagine life in an interdimensional spacecraft playing 1930’s baseball up the walls, which just doesn’t seem like a favored option to me. I like Earth, I like being embodied, I love the miraculous beauty all around me. I’m not willing to kiss off humanity, not when we already hold the paths to transformation. While we could maybe transform into something that can live in space for generations, I’m more interested in transforming our thought and behavior patterns so that we can live well in relation to nature and thrive on this planet now and into the future.

This longing for a better future for humanity was the impetus for my stepping in to lead NewStories so many years ago. There has to be a better answer than Armageddon. While I’m facing that we can’t get through whatever challenges are already in motion without great loss of life and a complete restructuring of our geopolitical boundaries, I will grieve deeply for the loss and destruction. I love the beauty of this Earth and the glories of our skies and the creativity of humans. But I am going to have to learn to live well and without regret with the changes that are already happening. In this neck of the British Columbia woods, the weather is so mild and so beautiful that it’s difficult not to completely surrender into rejoicing. But I know what no snow cap means to the orchards and vineyards and forests of eastern Washington—they are already burning up. I feel the drying land and the dying plant life. How do I find joy as I also experience a constant undercurrent of loss and grief?

I went into the Summer Gathering caught in the depth of the problem, not sure there was any hope, the forces set in motion just too massive to change. But I come out of the Gathering with hope and incredible inspiration and awe about the work that people are doing and the deep spirit with which they are doing it. Why is that? What about the Gathering helped move me from despair into en-couragement (having the courage, the heart to move forward)?

Well, the work being done for one thing. It’s just extraordinary—in every realm, from every corner, led by every age. But that wasn’t it entirely. Speakers in front of a rapt group, as good as they were, are only a small part of a larger context of what it means to gather in community. What made the event special was the ways we connected with each other. So much of the deepening of community happens around the scaffold of the mind-bending sessions–in the halls, in the hot tubs, on the beach, swimming the ocean, walking the land, eating together. And in after parties, singing, dancing, intimate conversations on a quiet deck. There’s always an open mic, its own revelation of hidden talent precipitating awe and wonder. And the closing party, this year dj’d by Cosmo Sheldrake, musical wizard extraordinaire.

The structure itself, plus well-woven threads of good food, good place, and good facilitation, supports the emergence of deep community in a matter of days. We are connecting at the level of soul, from the authenticity of sharing our stories and caring about each other. We’re just “us’ins”, all gathered as if from neighboring tribes to get a perspective on the times we are in, to understand what is happening to our place and the forces impacting us, to sing together and to explore the many ways to exchange and celebrate.

I began to realize that through all of the different elements of the Gathering, we were living Paul Born’s path for deepening community:

And, indeed, through deepening community, I at least began to find joy again in these chaotic times.That’s really the purpose of a gathering like this, a chautauqua moment where we raise the tent, deeply interact with one another,  then return refreshed and renewed, reinspired. There is so much good work being done, so often invisible in the bombardment of fear, hate, and disaster all around us. Yet we have a choice of how we respond and how we deal with our our despair and discouragement. We can choose community, we can even help create it. Find the people who are your community. Tell your story and hear theirs, enjoy each other, care for one another, and help co-create a better world.