There is a Native American saying: “Tell me a fact and I’ll listen. Tell me a truth and I’ll learn. But tell me a story, and it will live in my heart forever.”

Creation stories tell us how our world and we as humans came into being. Every culture has a creation story that starts in some way with the words “In the beginning…” and attempts to describe cosmological events and why we are here. These stories are at the core of every religion and give meaning and place to whole groups of people.

Other stories tell about relationships between people and how certain forces interact with each other. At the personal level, one could  could tell a story about meeting a spouse, a first kiss and the progression of the relationship. At a larger, more cultural level there are many stories that we learn from or are drawn to that are known by thousands and millions of people. We see these in classic films like West Side Story and Gone with the Wind.

If we step back far enough and look at lots of different stories we begin to see that there are really only a few basic patterns. The two films above are in the tragic pattern of Romeo and Juliet, deep love that can never quite come together and ends in separation. Other films like Star Wars are in the pattern of the Hero’s journey. Joseph Campbell recognized this pattern in stories throughout time and wrote his book Hero With a Thousand Faces. In turn George Lucas, reading Campbell’s book, created Star Wars in the same pattern. The more a story adheres to the basic patterns that we have known through time, the more power it has. Part of the success of Star Wars is in its adherence to the pattern found in all cultures.

These are the old stories. They are clearest in the myths that have come down to us through time. Myths are collective stories, some have said collective dreams. They describe patterns in human experience that are basic to our understanding of life. We may want to dismiss a myth as not being real, but in truth a myth is often much more real than we know. Almost always, when we think we are acting independently and making up a new way to be, we are merely following the story line of some ancient myth we are yet to be conscious of.

Why is this important? If we are truly to consider new stories, new possibilities for our lives and for the future of our planet, we need to know the stories we are already in that our shaping our thinking and our behavior. At an individual level, we are all enacting a story whether or not we know what it is. Some stories are transformational and can serve as guides for our journeys, some are not and lead us to dead ends. 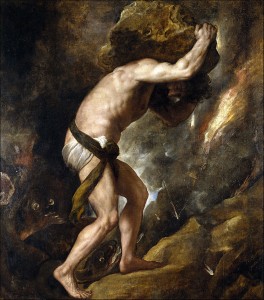 An example of the latter is the story of Sisyphus. Sisyphus is trapped in a pattern where he rolls a stone up a hill and just as he reaches the top, the stone rolls down again. Many people are living out the Sisyphus story, thinking “this time when I roll the stone up the hill, I’ll make it,” only to have it fall back into the same old rut.

An example of a transformational story is the myth of Amor and Psyche, where Psyche falls in love only to be left by her lover when she tries to see who he is. She must then go on a journey of initiations to mature herself to be able to re-find and hold her love. This is a profound story that James Hillman calls the Myth of Analysis, or the story which guides the process of Jungian analysis, where the human soul or psyche comes into a relationship with love or Amor. Discovering where your own life is in the progression of the story can provide a map for the next steps to take and how to get through the remaining initiations in the story.
Once we know where we are in a story, we can use it to guide us to its natural ending. We also have the option to begin to step out of the story, though this is no mean feat and requires becoming conscious of and recognizing in oneself all of the characters in the story.

There are many ways and resources for becoming conscious of and changing the story we are in. One new way is called Narrative Therapy where you work with a therapist to investigate your current story from the point of view of an investigative reporter exploring the different familial and cultural influences on the creation of the story. Over time, as you distance from the story, you have the option of creating a new narrative for your life.

The cultural stories in which we are imbedded require more work to recognize and begin to move outside of. We have discussed a bit about creation stories, but there are also end times stories, which are particularly impactful right now as we experience our world going through immense challenges. Think about some of the end times stories you know of. There is the Apocalypse story told in the last chapter of the Christian Bible of how the world ends. There were dozens of stories about 2012 and the prophesies of the end of time. There are Hindu tales of the Kali Yuga and the end of an age. Are we in the end times now? It’s certainly not difficult to match what’s happening on our planet now with old stories of floods, fires, pestilence, plagues, and war.

Where do we find ourselves in the story?

Do we live it out as it is written?

Is it possible to step outside of the old story and live into a new story?

Where are new stories arising already?

Can we co-create another possibility for ourselves and our earth?

Learn More About These Story Types