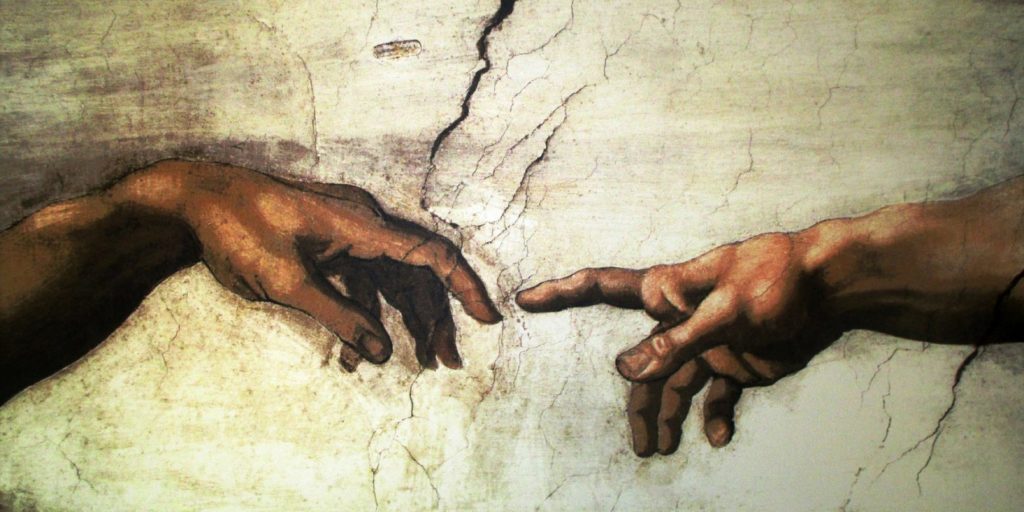 How did the world come to be? Where did humans come from? Why are we here? What difference does it make how these questions get answered?

Every religion and culture has a story about how the world was formed and how and why humans came to be. These stories help to give meaning, purpose and direction for humans to be in relationship with each other and the earth they live on. Many if not all of the stories posit the existence of forces beyond the earth and beyond humans that shaped the world we live in. The forces are called by different names for God or Great Spirit or sometimes seen as beings from other planets or star systems. While there are themes that run through all of the stories, and sometimes marked similarities, there are also subtle differences that dramatically impact how humans relate to the world around them.

The creation myths of indigenous cultures tend to place man in a sacred relationship to both other creatures and the earth itself. These stories guide man to live in harmony with the natural environment and to see himself as part of a larger living whole where everything is related. Other stories, like the opening chapters of Genesis, posit a different relationship of human to planet, where man is given “dominion” over the animals and seen in the image of God. Why is this difference important? What are the long-term consequences of different points of view regarding our place in the universe?

If we look at indigenous earth-centered cultures through time, we see that–if not interrupted by European conquest or Colonization—they remain immersed in the cycles of the earth, sustaining a lifestyle dependent on the seasons and production of the earth around them. Sometimes cultures—like those in Papua New Guinea or the Amazon Basin or the Kalahari—can go for thousands of years with very little change, maintaining their existence as a part of nature.

But what happens when the relationship of humans to the earth and her creatures is seen as dominion, where man is different from the other creatures, somehow above them and in charge of them? A different pattern of evolution appears to emerge. Jared Diamond in his book Guns Germs and Steel names animal husbandry and the storing of grain for later use as the seminal cultural change that created the capacity for Europeans to conquer the world. Perceiving oneself as separate from one’s surroundings, with the ability to mold, shape, change and have dominion over them, allows a developmental sequence that has created our modern world.
This separation, with its accompanying power to observe as if from the outside, was essential to the development of the scientific mindset that has allowed us to learn about not only our own world but the larger cosmos in which it is embedded. The scientists themselves furthered the separation, especially in the scientific revolution of the 16th century, by beginning to see the universe in mathematical terms and to imagine its workings as mechanical or dead.

Relating to the earth as a dead object, a vast repository of resources to be used by man for his own purposes has, on the one hand, vastly accelerated our knowledge of the universe and produced lifestyles unimaginable to earth-centric cultures. On the other hand, it has also created the situation we are in now where we are behaving much like a cancer that is outgrowing its host body. Our way of life and attitudes towards the earth are threatening to kill the very thing that sustains our life.

It is curious, and perhaps ironic, that the same forces which have culminated in the skills of the world’s most revered scientists are now guiding us, through them, back into a relationship with the earth and the cosmos more akin to indigenous creation stories. We are beginning to understand that the earth is a living being and that we are a part of, not separate from her evolution.

As we simultaneously probe the cosmos through ever-larger telescopes and the inner workings of subatomic material through immense accelerators, we begin to discover that our bodies are made up of stardust and that many of the ancient creation stories tell the true story, in metaphoric terms, of the progression of our own creation.

Even the creation story in Genesis aptly, though cryptically, names the evolution of the universe and the creatures within in. While there are those who hotly debate the time frame of whether a “day” is the 24-hour version that we experience as creatures of earth or a “cosmic day” which describes an evolutionary epoch spanning millions or billions of years, the actual sequence is the same. And if we pause for a moment and behold the exquisitely fine-tuned time sequences and temperatures and pressures and conditions that make life possible, it becomes difficult not to experience the forces that brought us into being as something sacred and awe-inspiring, whether or not we call them God.

What difference would it make if science brought us back into a resonance with the ancient stories of a living universe where all beings are sacred, including the earth? How would that change us or impact the challenges of our time? What happens when we imagine our bodies to be primeval stars in a new form or see the earth as alive and sacred or recognize that we are the latest result of a process 13.7 billion years old?

We are coming to a time when the way we have been living on the earth cannot continue. Many of us know or sense the impending crisis brought on by the cascading collapse of the systems–food, water, energy and climate—that sustain us. Our newly-gained understanding of the evolution of the earth tells us that the earth has hit several such impossible predicaments throughout its history resulting in quantum leaps of innovations like photosynthesis and oxygen eating organisms. The earth itself—or whatever forces guide evolution—created these changes long before humans came into being. These same forces produced humans and human consciousness. If we are at the wall of change now, how is our presence part of what happens next? Are we to become extinct like so many other species that were unable to adapt to changing conditions? Or is it possible that the evolutionary impulse that developed beings that could perceive the development itself has us in some way in a position to be co-creators of our own next creation story?