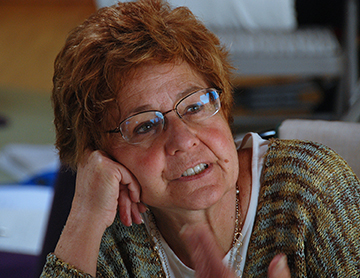 Elizabeth Rabia Roberts, Ed.D, is an internationally known citizen activist and women’s advocate. She is MaShieka—spiritual guide and teacher—in the International Sufi Way, and a lifelong student and teacher in nondual Buddhism. She has spent nearly 50 years working as a change agent for social and environmental justice issues. Seventeen countries in the past 25 years have been her home. She has slept in tents, bamboo huts, ashrams, church basements, hotels, the occasional palace, and the guest rooms of friends around the world.

In every country in which she has lived and worked, she has arranged women’s retreats, empowerment projects and leadership trainings in the “New Story.” She has listened to thousands of women from different cultures share their political feelings as well as their most intimate stories. Recently, while in Afghanistan, Rabia was called one of our “global grandmothers,” a title she cherishes above all others.

Her earliest social activism came in 1965, when she spent two years in Selma, Alabama working with Martin Luther King, Jr. She received her M.A. in Liberation Theology from Marquette University in 1968. As a single mother, she moved to Washington D.C. After a year of living on welfare—a learning experience that would greatly inform her future work—she was hired as the Youth Coordinator for the White House Conferences on Children and Youth, and spent two years in this position before moving on to work as the assistant program director for the newly-formed National Public Radio. She served for seven years as special consultant to John D. Rockefeller III on projects related to women’s empowerment, population, and development issues.

In 1982, Rabia received doctorate from Harvard University in Philosophy of Education. In the 1980s, the influence and teachings of Catholic priest, Father Thomas Berry, and Buddhist teacher, Joanna Macy, paved the path for Rabia to become a well known educator, weaving together Eastern and Western traditions, and focusing on the spiritual and scientific basis of the Great Turning—the global paradigm shift taking place in our understanding of planetary interconnectedness, the inseparability of spirit and matter, and the relationship of the human-earth future.