Okay, I have to begin this blog telling you about a new methodology we’ve just developed in Japan.  We call it World Carfe.  Here’s the story.  We’re sitting at dinner in an onsen near Renshoan after a day of talking about how we might bring some of the learning from Transition Towns in Japan in to the Tohoku region.  I think it is an important exploration, which I’ll describe in a moment.  We scheduled this meeting for March 11th so we could also commemorate the second anniversary of the disaster and pray for all of those affected.  At dinner one of our transition town members says that while he is in Fukushima he r 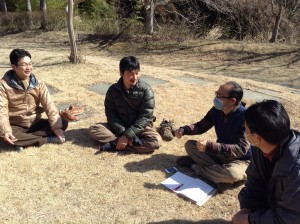 eally would like to go to the coastal area to witness area of coastal disaster.  We all want to support him, and we also know we have a lot more to talk about the next day.

One member suggests we might rent a mini-van.  There are seven of us and we have two cars.  I thought about it for a while and suggested instead that we do World Carfe.  And we did.  We start off, three people in one car, four in the other.  After 45 minutes of driving, we stop at a rest area and harvest the first round, then change people in cars and drive on to the ocean, another 30 minutes away.  We reflect and pray at the ocean, get back in cars in the same groups and return to the rest area where we harvest again, switch people in cars, and continue back to Renshoan.

Okay, a little silly — but a lot useful.  We were able to continue and deepen our dialog!  It might seem frivolous, especially on the anniversary.  I received a number of e-mails from friends around the world who were thinking about the disasters.  In Fukushima, I think for most of us, it felt important to remember, to recall, to pray on the 11th — and it also felt like “okay, we have work to do.”

Back to Transition Towns in Japan.

There are now about 30.  The start was five years ago.  Three people were with us who are leaders of the movement here and who each played key roles in starting transition towns in their own communities of Minami Aso (view in Google Translate) in Kyushu, just outside Tokyo and Tsuru in Yamanashi Prefecture, near Mt. Fuji. Others in this design meeting were local residents from Fukushima interested in Transition Towns as well as some of us from the Tohoku Futures Network.  We ended up having a helpful exploration of how Transition Towns have started in Japan as well as some starting points in terms of how this work might be shared in Tohoku.

It Begins with Friendship and Patience.

These three Transition Towns were started by “outsiders.”  They came because they were attracted to the town.  They knew that they had to become friends first, and then introduce new ideas.  One person spoke of how, “even when someone in the community looks and acts differently, perhaps we have more in common than we realize.  Even if they say something bad about me, I don’t dislike them.” They also spoke of not using a lot of fancy jargon or English words.  Work with simplicity.  “Gradually,” they say, “things begin to happen.  It’s so difficult to change radically, but many more people want to find new ways of living more lightly, they just don’t know where to start.”

One person remarked “I arrived with listening, and then we did physical work with local people.  Working together is a purpose in and of itself.  Then I began to make the connections and then I started to find my own place and activity.  I have gratitude that community provided me with a place to be and it stimulates my natural desire to give something back.

How Does it Start?

Before the triple disasters of March 11, 2011 most people had to be persuaded that transition was important.  Now, the questions are about how – not about why.  The organizers work consciously with excitement and joy.  “I love what I am doing, and it attracts others.”  Work always begins at a small scale and then travels through friendship.  “People who are sympathetic to the idea of transition are attracted to ideas about new ways of living. There’s a combination of sympathy and passion – transition is not something to be pushed.  It is something people feel.  Of course, as we work, there are many failures, but that’s okay — we continue to make joy.”

What is the Work?

We kept coming back to a key principle of working together for enjoyment.  This isn’t about doing something hard and trying to change the world.  It is about living in a better way with friends and neighbors.  When working with joy, it naturally attracts others!  Three key areas kept coming up in terms of what kinds of work:  local currency, permaculture and energy.  Local currency, first in the form of labor exchanges and then in the form of exchanging goods is an easy starting point.  It also starts to map the assets of the community.  Permaculture is another basic starting point.  More and more people want to grow their own food and eat more healthy food.  Beginning to develop alternative sources of local energy production is also just a simple starting point that makes sense to people.  Fujino has developed a workshop for people to create their own solar panels; people there have seen time and time again how much excitement gets generated!

The idea of being a Transition Town evolves naturally and gradually.  People feel the transition in their own daily lives and then are more interested in thinking about it in broader terms.  This is not conceptual work in Japan — it is work with hands and with one’s own lifestyle.  Kato-san from Tsuru speaks of how now he spends about half of his time making his life sustainable and the other half of his time earning money for extra things.

How Does it Spread?

Transition Towns  Japan is the larger network of Transition Towns in Japan.  From the start five years ago, there are about 30 now.  The work and activities in each area is different — depending on what brings people in those communities joy.  They are developing a new website to share transition ideas and connect people from Transition Towns.  They do an annual gathering of people in Transition Towns and do another annual outreach and introduction.  There’s a commitment to grow the Transition Town movement, and to do it naturally and organically — not trying to push or insist on anything.

Our World Carfe took a little more time than anticipated and we had a limited amount of time when we returned to Renshoan.  So ideas for work with Tohoku are still in preliminary stages.  It seems as if two things might be pursued.  The first is to reach out to friends in Tohoku who are already interested in Transition Towns and to invite them together as a kind of core group to consider how to bring more of this possibility into Tohoku.  The second is to do a Transition Town event in Tohoku, inviting people who might be interested in Transition Towns to come together and take a look at what’s being done in other areas.

We’re working with a interesting dynamic.  Transition Town folks don’t want to appear in any way to be pushing or selling anything.  They know that’s not how it grows.  People in Tohoku, perhaps especially those who might be interested in Transition, are very resistant to ideas being pushed in from the outside.  These reluctances fit together.  On the the other hand, there’s the old ‘you don’t know what you don’t know.” Which means it seems important to find a way that works with attraction and joy to invite more people in.

It was delightful to spend the anniversary of 3.11.11 in this generative field.  We continue to find and explore possibilities!